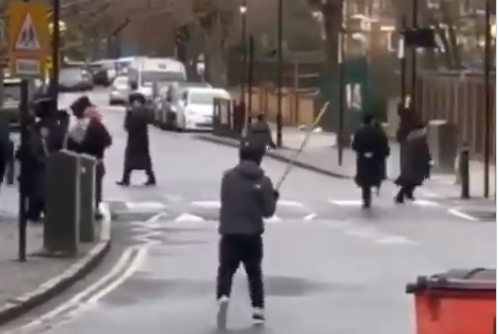 Yesterday, Shomrim of London released this video taken Saturday of a man threatening and chasing religious Jews of Stamford Hill, London, with a large stick:
The people making the video are laughing at the attack.
Police were eventually called and arrested the 29-year old man:

According to the experts on antisemitism like Linda Sarsour and Marc Lamont Hill, this cannot be an case of antisemitism because - after all  - it doesn't appear like this gentleman is a white supremacist, based on his voice.
Similarly, these twins from Gaza who decided to harass any religious Jews they could find in Antwerp are clearly not antisemitic, because they are from Gaza! They must be just anti-Zionist.

Adham & Amjad are twins from #Gaza. They are avid rollerbladers, currently in Belgium. Watch them visit the Jewish neighborhood in Antwerp during the night curfew.
Uploaded to YouTube on 31 Dec 2020 https://t.co/sLXefXyj20 pic.twitter.com/SZstZzL3h9

The video has over 250,000 views on YouTube and over 28,000 Likes from Arabic-speaking people who cannot possibly be antisemitic.
It is interesting that the people who claim to care the most about antisemitism don't seem to be upset over most forms of antisemitism.
We have lots of ideas, but we need more resources to be even more effective. Please donate today to help get the message out and to help defend Israel.
Elder of Ziyon at Wednesday, January 06, 2021
‹
›
Home
View web version