For Islamists in Gaza and Syria, storing weapons in civilian areas is a strategy 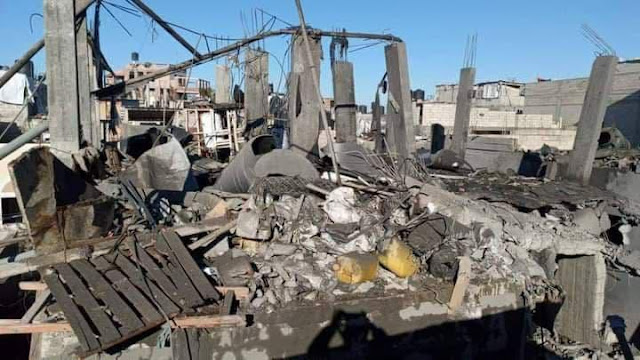 According to PCHR investigations, at approximately 08:30 on Saturday morning, 23 January 2021, an internal explosion occurred in the home of a member of a Palestinian armed group in the center of Beit Hanoun town, northern Gaza Strip. Two families occupied the house, a total of 10 persons, including five children and three women. The explosion resulted in 47 injuries among the house’s residents and neighborhoods, including 19 children and 15 women; they were transported to Beit Hanoun Governmental Hospital, where the houseowner was deemed in a critical state. He was referred to al-Shifa Hospital for treatment. The injuries of 22 persons were classified as moderate, and the injuries of the remaining 24 were deemed minor. Additionally, the explosion caused the collapse of parts of the 2nd floor ceiling (western) where the explosion occurred; neighboring houses sustained varied damage, and windows were shattered in the Beit Hanoun Governmental Hospital, the Beit Hanoun Police Station; and 3 United Nations Works and Relief Agency (UNRWA) schools, located eastern of the explosion site. Local electric and communication networks were also damaged.
Field investigations indicate that the houseowner is a member of an armed group, and that the accident resulted from the explosion of a large-sized explosive device stored inside the house.
PCHR calls upon the competent authorities to enforce stringent measures, including banning the storage of explosives in populated areas, in order to avoid the recurrence of similar tragedies and maintain civilians’ lives and their properties.  PCHR emphasizes that the constant disregard for such demands alerts to further civilian causalities and portends other tragedies.

Of course, Hamas and other terror groups build their explosives manufacturing facilities in residential areas on purpose, both to deter Israel from bombing them and to put Israel in a position of looking like it deliberately bombs civilians when it does attack them (which is all legal under international law when the target is of significant military value.)
Only this month, Islamists deliberately placed weapons in civilian areas.
In response to a presumed massive Israeli attack in Syria on January 13, Iranian allied forces deliberately moved weapons into residential areas of Deir Ezzor.
From Al Monitor:

Iranian forces and affiliated militias in Deir ez-Zor province in eastern Syria carried out new redeployment and repositioning operations after their military sites and barracks were subjected to airstrikes, believed to be carried out by Israeli aircraft Jan. 13.
Ahed Slebi, a journalist in the Naher Media Network, which covers news about Deir ez-Zor, told Al-Monitor, “The Iranian Revolutionary Guard Corps [IRGC] and its militias in Deir ez-Zor governorate have carried out unprecedented military action, due to the violent bombing that targeted their sites. The Iranian militias transferred the bulk of their members and military equipment to residential neighborhoods in Deir ez-Zor, al-Bukamal, and al-Mayadin. The new deployments included transferring rockets and heavy weapons and hiding them inside the tunnels that Iranian forces had previously dug in the vicinity of al-Bukamal and al-Mayadin and on the outskirts of Deir ez-Zor.”
Slebi added, “The IRGC and its affiliated militias fear more violent bombings during the coming period, which is why they are fortifying their sites and hiding their weapons and military headquarters inside residential neighborhoods. They have also lowered flags from the roofs of the buildings where they are stationed. They removed all signs indicating their presence to avoid being targeted, and imposed a security cordon around their military sites.”

Needless to say, there was no condemnation of this deliberate war crime by Amnesty or Human Rights Watch.
Elder of Ziyon at Sunday, January 24, 2021
‹
›
Home
View web version