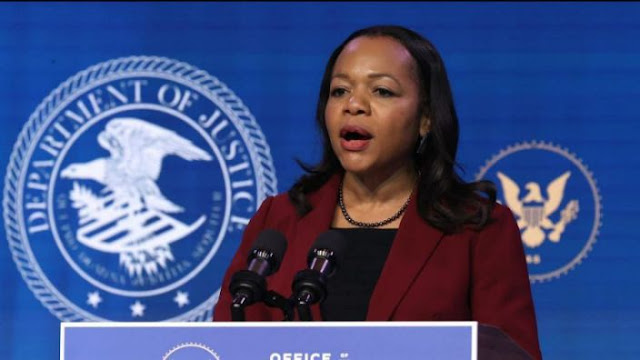 Kristen Clarke was nominated last week to serve as  Joe Biden's assistant attorney general for civil rights.
If confirmed by the Senate, she will lead the Justice Department's Civil Rights Division.
A 1994 incident makes one wonder how committed she is to civil rights for all.
As the Harvard Crimson reported then, Clarke, as president of the Black Students Association,  invited rabidly antisemitic Wellesley Professor Tony Martin to speak at Harvard:

Martin, the author of an anti-Semitic tract entitled The Jewish Onslaught, used his Harvard forum to denounce the Jewish tradition and the Jewish people for holding a "monopoly" on centuries-worth of the notion of divinely ordained African inferiority. Repeating his belief that the "so-called Sages" of the Babylonian Talmud were the earliest racists of recorded history, Martin urged Harvard students to consider The Bell Curve, a controversial new book linking race and intelligence, as only the latest manifestation of a racist tradition spawned by Jews.

Martin also taught in his own class a course that included the Nation of Islam antisemitic tract claiming that Jews controlled the slave trade, "The Secret Relationship Between Blacks and Jews."
Kristen Clarke defended the hater, telling the Crimson that "Professor Martin is an intelligent, well-versed Black intellectual who bases his information of indisputable fact."
If she considers the Nation of Islam's antisemitic screeds to be indisputable facts, it is hard to imagine that she can be an effective advocate for civil rights for all.
It gets worse, though.
1994 was the year that The Bell Curve was released. It was a controversial book that claimed that intelligence was in large part (between 40% and 80%) a genetic trait and further claimed that Black people were, on average, less intelligent than white people.
The Black community was justifiably outraged, and many others showed serious errors in the book. At the time, however, it was taken seriously and some students at Harvard defended it.
Kristen Clarke weighed in on the controversy in a letter to the Crimson, where she put forth an alternative theory that Black people were superior to whites because they have more melanin:

In response to those who defend The Bell Curve ("Defending The Bell Curve," Opinion, Oct. 24, 1994), please use the following theories and observations to assist you in your search for truth regarding the genetic differences between Blacks and whites.
One: Dr. Richard King reveals that at the core of the human brain is the "locus coeruleus" which is a structure that is Black because it contains large amounts of (neuro) melanin which is essential for its operation.
Two: Black infants sit, stand, crawl and walk sooner than whites.
Three: Carol Barnes notes that human mental processes are controlled by melanin--that same chemical which gives Blacks their superior physical and mental abilities.
Four: Some scientists have revealed that most whites are unable to produce melanin because their pineal glands are often calcification or non-functioning. Pineal calcification rates with Africans are five to 15 percent, Asians 15 to 25 percent and Europeans 60 to 80 percent. This is the chemical basis for the cultural differences between Blacks and whites.
Five: Melanin endows Blacks with greater mental, physical and spiritual abilities--something which cannot be measured based on Eurocentric standards.

If the Bell Curve is racist - and it is - this melanin theory is far, far worse.
And it is still believed by prominent Black celebrities and their followers today who also happen to be antisemitic, as we saw last summer.
Yes, this was 26 years ago. And yes, Clarke has since forged ties with liberal Jewish groups. But has she ever disavowed her praise of an antisemitic professor? Has she changed her mind about melanin making Blacks superior in all ways to whites?
She says now, “We will turn the page on hate.” At college, she promoted hate. If Kristen Clarke is going to be effective in her job, she needs to address these concerns now.
(h/t Shoshana Dreyfus)
We have lots of ideas, but we need more resources to be even more effective. Please donate today to help get the message out and to help defend Israel.
Elder of Ziyon at Tuesday, January 12, 2021
‹
›
Home
View web version