US budget includes funding for Israeli-Palestinian peace in the Middle East. Too bad Palestinians aren't on board. 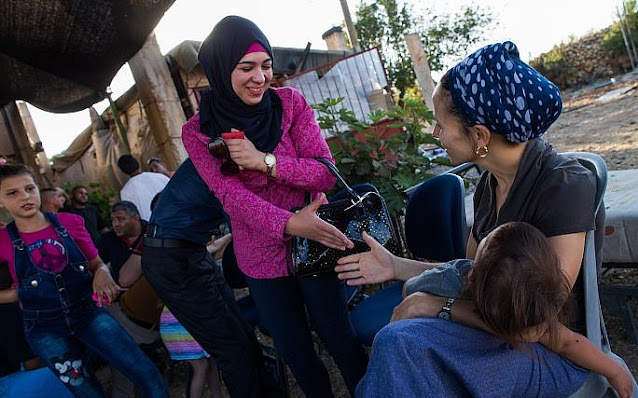 It is worth reading the text of the act:

NITA M. LOWEY MIDDLE EAST PARTNERSHIP FOR PEACE ACT OF 2020
SEC. 8002. Congress finds the following:
(1) Economic development in conflict settings has been shown to support stabilization by empowering entrepreneurs, growing the middle class, and mitigating unemployment.
(2) In 2018, unemployment in the Palestinian territories was 32.4 percent. Gross Domestic Product (GDP) growth in the Palestinian territories declined from 2017 to 2019, and it is projected to further decline in 2020.
(3) According to the World Bank Ad Hoc Liaison Committee’s April 2019 Economic Monitoring Report, ‘‘to achieve sustainable economic growth, in the Palestinian territories, growth and job creation going forward will need to be private sector driven’’.
(4) According to the 2018 Joint Strategic Plan of the Department of State and the United States Agency for International Development, ‘‘assistance can help prevent new recruitment to terrorist organizations, reduce levels of violence, promote legitimate governance structures that strengthen inclusion, and reduce policies that marginalize communities’’.
(5) Although economic development is an important tool for stabilizing conflict-prone settings and establishing connections between communities, economic development by itself will not lead to lasting peace. People-to-people peace-building programs further advance reconciliation efforts by promoting greater understanding, mutual trust, and cooperation between communities.
(6) While the United States and its international partners continue to support diplomatic and political negotiations between the representatives of the parties to the Israeli-Palestinian conflict, such efforts require broad popular support among the people on the ground to succeed.
(7) Achieving sustainable, high-level agreements for lasting peace in the Middle East must come through, and with the support of, the people who live there, and the United States and its international partners can help the people of the region build popular support for sustainable agreements for lasting peace.
SEC. 8003. It is the sense of Congress that—
(1) building a viable Palestinian economy is central to the effort to preserve the possibility of a negotiated settlement leading to a sustainable two state solution with the democratic, Jewish state of Israel and a demilitarized, democratic Palestinian state living side-by-side in peace, security, and mutual recognition;
(2) United States and international support for grassroots, people-to-people efforts aimed at fostering tolerance, and building support for such solution, can help counter extremist propaganda and the growing issue of incitement;
(3) strengthening engagement between Palestinians and Israelis, including through people-to-people peace-building programs can increase the bonds of friendship and understanding;
14) investing in the development of the Palestinian economy and in joint economic ventures can advance multiple sectors to the benefit of local, regional, and global parties; and
(5) Congress encourages cooperation between Palestinian, American, and Israeli business sectors in order to benefit the Palestinian, American, and Israeli peoples and economies.
PEOPLE-TO-PEOPLE PARTNERSHIP FOR PEACE FUND
SEC. 8004. Chapter 4 of part II of the Foreign Assistance Act of 1961 (22 U.S.C. 2346 et seq.) is amended by adding at the end the following:
SEC. 535 PEOPLE-TO-PEOPLE PARTNERSHIP FOR PEACE FUND.
(a) ESTABLISHMENT.—Beginning on the date that is one year after the date of enactment of this section, the Administrator of the United States Agency for International Development is authorized to establish a program to provide funding for projects to help build the foundation for peaceful co-existence between Israelis and Palestinians and for a sustainable two-state solution. The program established under this subsection shall be known as the ‘People-to-People Partnership for Peace Fund’ (referred to in this section as the ‘Fund’).
...

It all sounds great, right?
Except that the Palestinian Authority forbids any "people to people partnership" programs. They have opposed any such programs for many years, no matter who sponsors it. The EU used to have lots of funding for such programs, and perhaps they still do, but the programs have morphed into intra-Israel cooperation between Israeli Arabs and Israeli Jews.
While the Palestinian Authority does not subscribe to BDS, they have been very keen in stopping anything that sounds like "normalization" - which is what most of this Lowey Act is concerned with.
Israelis would love to engage in people to people dialogues and cultural initiatives with Palestinians. Some Palestinians would, too. The problem has always been the Palestinian Authority.
Even today, it is considered taboo to talk about Palestinian intransigence. But that is the key issue that stops any sort of real peace, and these sorts of programs prove it, year after year.
We have lots of ideas, but we need more resources to be even more effective. Please donate today to help get the message out and to help defend Israel.
Elder of Ziyon at Wednesday, December 23, 2020
‹
›
Home
View web version