Time magazine writes a biased, pro-BDS piece pretending to be an objective backgrounder

Time magazine published an article by Sanya Mansoor, "The Trump Administration is Cracking Down Against a Global Movement to Boycott Israel. Here’s What You Need to Know About BDS" that pretends to be an objective piece - but is in fact a one-sided piece of pro-BDS propaganda.
Here are some of the most egregious examples:

BDS was formally launched in 2005 by a coalition of about 170 Palestinian grassroots and civil society groups.

To discuss the origins of BDS without mentioning its true origins at the notoriously anti-Israel and antisemitic Durban conference of 2001 is to deliberately hide its Jew-hating origins.
The United Nations World Conference against Racism, Racial Discrimination, Xenophobia and Related Intolerance included people selling copies of the Protocols of the Elders of Zion and Jewish delegates being hounded.
Recall that the US and Israel left the conference  because of its antisemitic focus, as well as the removal of language against antisemitism in its final statement. The conference resolution included language that called Israel "a racist apartheid state," guilty of the "systematic perpetration of racist crimes including war crimes, acts of genocide and ethnic cleansing ... and state terror against the Palestinian people." The language was so one-sided that even Amnesty and Human Rights Watch expressed concern about the final resolution, but said that the good outweighed the bad so they ended up supporting it (a pattern that has only become worse in the years since then.)

BDS started in 2005—just one year after the International Court of Justice issued an advisory opinion that “Israel’s building of a barrier in the occupied Palestinian territory is illegal.”

The article here and elsewhere tries to make BDS appear to be only against "settlements" and not Israel's existence as a whole. BDS has nothing at all to do with the ICJ opinion.

Boycotts, although a common form of non-violent protest and an effective way to raise awareness around an issue, are often not effective in creating a significant or immediate economic dent or policy change. In the late fifties, the African National Congress in South Africa called for foreign governments to withdraw investments, halt trade and enact a broad boycott South African consumer goods, academia and sports. In the 1790s, English and American abolitionists boycotted sugar produced by slaves.

And in the 1930s, Nazis started boycotts against Jewish-owned stores. Why is that not given as a historical example of a boycott?
However, the next example is meant to be a bridge between these two examples of boycotts and BDS:

In 1945, the Arab League—a collection of close to two-dozen Middle Eastern and African countries began an economic boycott of Israeli companies and goods.

Really? "Israeli" companies and goods? Because the language of the 1945 boycott didn't say "Israeli" - it called to boycott Jewish businesses and goods! The specific language was "Products of Palestinian Jews are to be considered undesirable in Arab countries."

In some ways, BDS continues and was born out of the lack of alternative ways to express Palestinian grievances. “Every other form of Palestinian resistance has been criminalized and made unavailable,” says Noura Erakat, a human rights attorney and assistant professor at Rutgers University. “It’s not that BDS is integral. What do we have besides it?”

Practically no critics of BDS are quoted (except for a brief quote by Rabbi David Wolpe.) while crtitics of Israel are quoted at length.   As far as answering the question by Noura Erekat - whose Palestinian origins are not mentioned - perhaps one alternative is if the Palestinians would negotiate with Israel in good faith and accept the existence of a Jewish state, as Bahrain and the UAE have.

The article also includes a link to the BDS webpage - but the article has no similar links to any BDS critics.

The BDS national committee says that it does not advocate for any particular solution to the conflict in terms of a “one state” or “two state” solution but that their focus is on Palestinian human rights and regaining control of occupied territories. “Under international law, no political regime, especially a colonial and oppressive one, has any inherent “right to exist,” said Omar Barghouti, human rights defender and co-founder of the BDS movement, in an email to TIME. “No state, whether apartheid South Africa in the past or apartheid Israel today, has a right to be racist or supremacist, privileging part of its population based on identity, and excluding another part, which happens to be the indigenous nation.”

These statements calling Israel "racist" and "supremacist" and "apartheid," are accepted as fact by the writer, even though they are easily provable lies - apartheid South Africa did not give Black citizens equal rights and Israel does give all citizens equal rights.
And it would not be difficult to show that Barghouti's statements contradict the first sentence - BDS considers all of Israel to be illegitimate, so of course it doesn't support a two-state solution that still allows Israel to exist as the only Jewish state, while Arab and Muslim and Christian and French and Greek and Italian states are not considered to be inherently racist.
BDS advocates the dismantling of Israel and replacing it with another Arab state (via one-state solution) or two Arab states (via "right to return.")

Is BDS anti-semitic?
BDS leaders and supporters have vehemently denied that the movement is anti-semitic, saying that they “target the Israeli state” for “serious violations of international law” and do not go after “any individual or group simply because they are Israeli.” When Pompeo conflated BDS with anti-Semitism, Palestinians, as well as national and international civil rights advocates, objected.

Mansoor gives practically no arguments that prove that BDS is an antisemitic movement.

BDS doesn't recognize the Jewish people as a people, only a religion. It advocates boycotting only Jewish businesses in Israel, not Arab-owned businesses. It puts a litmus test on Israeli Jews, and only Jews, to declare themselves to be explicitly anti-Zionist in order to allow them to speak on campus - and it often objects to Jews in any  political role on campus unless they are anti-Zionist. it objects to only the Jewish state and not any other state that defines itself in ethnic terms.

You wouldn't know any of this from this article.

She also doesn't mention that the German parliament and Canadian Prime Minister Justin Trudeau declared BDS to be antisemitic. Instead she frames it as only being opposed by right-wing Jewish groups and Mike Pompeo.

“If you say anti-Zionism is anti-Semitism then you’re basically condemning all Palestinians as anti-Semites because they decide to exist,” Erakat says. The reason that BDS has been met with fierce opposition is because it “morally challenges Zionism as a political project,” she adds.

This is an absurd lie - no one says that normal criticism of Israel or "Palestinians existing" is antisemitic.

Jews and Jewish groups are not united on the issue about whether BDS is anti-semitic. While many conservative Jewish groups criticize BDS for unfairly singling out Israel and worry that it’s ultimate aim is to delegitimize any notion of a Jewish state, dozens of progressive Jewish groups have taken issue with the characterization of BDS as anti-Semitic, fearing that doing so overshadows “legitimate critiques of Israeli policies.”

Only 3% of Jews in the US consider themselves "generally not pro-Israel" and only a fraction of  them would go further and say that they are actively anti-Zionist.  This paragraph implies that the topic is hotly contested when in fact the "dozens" of progressive Jewish groups are only a sliver of the Jewish community. This is dishonest reporting on every level.

Almost one quarter of American Jews under 40 support the boycott of products made in Israel, according to a National Jewish Survey of 8000 Jewish voters in the 2020 election from J Street, a “pro-Israel, pro-peace” group that identifies as progressive—they oppose Israeli occupation but are also against the global BDS movement.

A careful look at the results of the poll(of 800 Jews, not 8000) show that this is not true. There were two questions, one about boycotting Israeli products in general and one about boycotting products because of Israel's policies in the West Bank.  The people polled gave inconsistent answers to the second, loaded question and almost certainly understood the second question to refer only to "settlement" products. 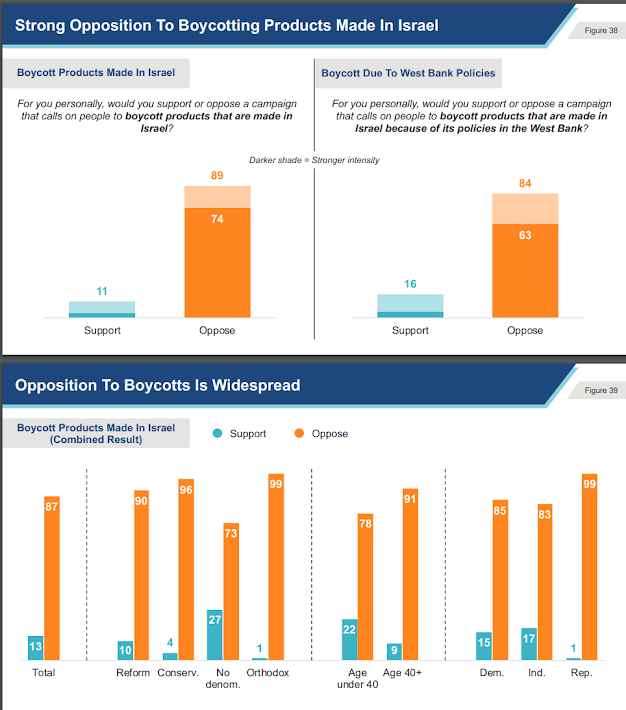 Student bodies at a few dozen U.S. colleges have voted to divest from or boycott companies that profit from Israeli occupation and human rights violations, according to the National Students for Justice in Palestine, whose chapters have been advocating for BDS.

And how many have voted down BDS resolutions? And what it the trend? A real reporter would find out. Mansoor just parrots quotes from BDSers.
This is not an objective description of BDS. It is a thinly disguised piece of pro-BDS propaganda.
We have lots of ideas, but we need more resources to be even more effective. Please donate today to help get the message out and to help defend Israel.
Elder of Ziyon at Sunday, December 06, 2020
‹
›
Home
View web version