On Sunday, Rashida Tlaib (and Linda Sarsour) retweeted the statement "From the river to the sea, Palestine will be free" used by Israel haters calling on the destruction of Israel. 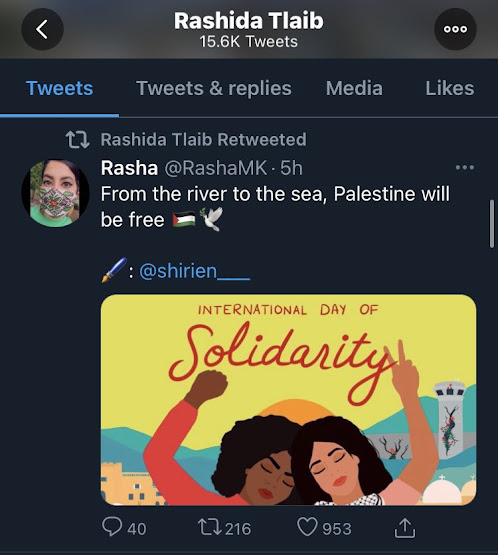 When Jews got upset, she took down the retweet.
Peter Beinart, now a New York Times op-ed writer, defended Tlaib's original post - twice.
His arguments are so disingenuous and filled with so many falsehoods that they need to be seen to be believed.
Beinart started off with this tweet: 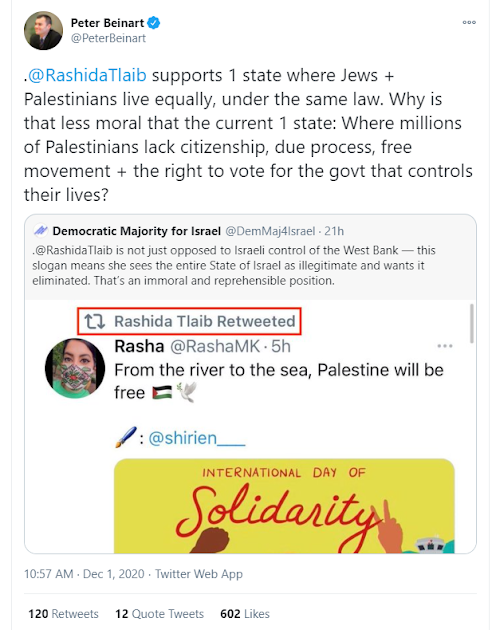 Beinart's first sentence that Tlaib wants a single state were Jews live in equality with Palestinians is based on her carefully vetted campaign conversation with The Detroit Jewish News where she claims that al lshe cares about is human rights and that it is Israeli racist policies that force her to this position; she visited Israel in 1995 and was impressed that Jews and Arabs lived together in peace but she says that is no longer true.
This is gaslighting.
Even before she was sworn in to Congress she posed with the map that had a Post-It note in her office that indicated she wants to replace Israel with Palestine. If she wants a state with equal rights, why can it not be called Israel? (updated, h/t Israellycool) 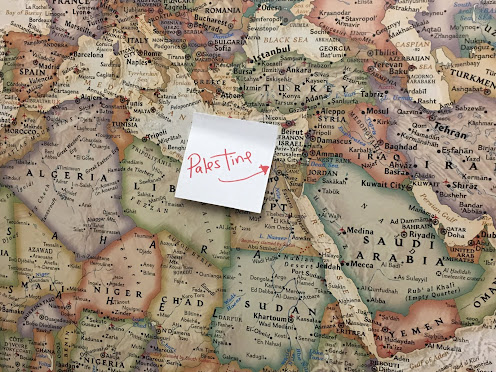 More importantly, Tlaib explicitly supports the "right to return," whose only purpose is to destroy the Jewish state and force Jews to live under Arab majority rule. Her talk about "equality" only applies to a situation where Arabs control what "equality" means, which can be seen in the Palestinian constitution:

Article 1
Palestine is part of the larger Arab world, and the Palestinian people are part of the Arab nation. Arab unity is an objective that the Palestinian people shall work to achieve.
Article 4
1. Islam is the official religion in Palestine. Respect for the sanctity of all other divine religions shall be maintained.
2. The principles of Islamic Shari’a shall be a principal source of legislation.
3. Arabic shall be the official language.

This doesn't leave much room for Jews except as a tolerated minority. That is the "equality" Tlaib wants to see.
Beinart's second sentence is one of his go-to themes, where he pretends that Palestinians who live in Area A and Gaza - with their own flag, Olympic team, prime minister, president, court system, police, citizenship laws, passports, trade, zoning laws, cities that Jews couldn't live in if they tried, UN membership - are really living in Israel where they are denied citizenship. By his logic, Canadians live in the same state as citizens of the US since their economy is dominated by another country. It is a laughable lie but one that Beinart loves to repeat.
Beinart then doubled down on his defense of Tlaib's bigotry with an equal display of knowing lies and breathtaking ignorance:

Beinart starts off as a wise man: "I get it! But they are all wrong!"
It isn't "some" that have used the statement "From the river to the sea" to espouse the replacement of a Jewish state with an Arab state - it is everyone! There are no counterexamples. The idea that the boundaries of an Arab/Islamic Palestinian state is the exact borders drawn by Westerners to create the British Mandate is in the founding charters of the PLO and Hamas. (Although the 1964 PLO Charter contradicted itself  by specifically excluding the areas controlled by Jordan and Egypt, because only Jewish control is anathema to the freedom-loving Palestinians.)
Beinart then mentions that Hamas charter. It doesn't use that specific phrase once.
Beyond that, by using the phrase "1st Hamas charter" Beinart is pretending that it has been superseded. He's either lying or ignorant about a topic he pretends to know cold.  Hamas never replaced the charter in 2017; it issued a new political document but was explicit - in Arabic - that the original genocidal Hamas charter is still in place.
Why would Beinart want to downplay Hamas' evil? Because it blunts his message of Israel as an unparalleled violator of all that is holy and good - a position he shares with Rashida Tlaib.
But to point out that Tlaib tacitly supports BDS and explicitly supports the completely nonexistent "right to return" - which are both intended to destroy Israel and replace it with a Palestinian, not binational, state - is a "smear."
Beinart has no intellectual honesty. These two tweets prove that.
We have lots of ideas, but we need more resources to be even more effective. Please donate today to help get the message out and to help defend Israel.
Elder of Ziyon at Wednesday, December 02, 2020
‹
›
Home
View web version