Jewish history and culture in Morocco will soon be part of the school curriculum — a “first” in the region and in the North African country, where Islam is the state religion.
The decision “has the impact of a tsunami,” said Serge Berdugo, secretary-general of the Council of Jewish Communities of Morocco.
It “is a first in the Arab world,” he told AFP from Casablanca.
The decision to add Jewish history and culture to lessons was discreetly launched before the diplomatic deal was announced.
Part of an ongoing revamp of Morocco’s school curriculum since 2014, the lessons will be included from next term for children in their final year of primary school, aged 11, the education ministry said.
The move aims to “highlight Morocco’s diverse identity,” according to Fouad Chafiqi, head of academic programs at the ministry.

Yet when this story was reported in Palestinian Arabic media, there was a crucial change: 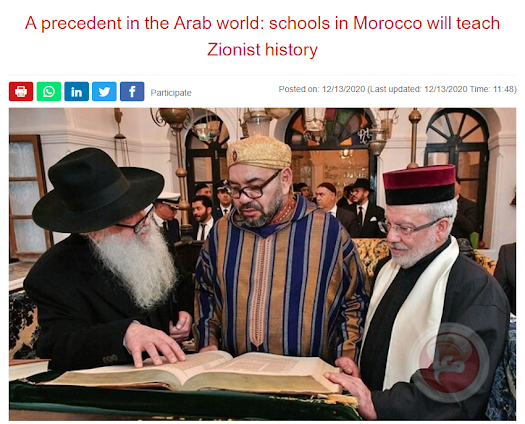 In a first precedent in the Arab world, Zionist history will be part of the curriculum in Morocco.

For decades, Arabs have pretended that they have no problems with Jews, only Zionists. Yet here, the Palestinians at least show that they don't distinguish between the two.
We have lots of ideas, but we need more resources to be even more effective. Please donate today to help get the message out and to help defend Israel.
Elder of Ziyon at Sunday, December 13, 2020
‹
›
Home
View web version