The Abraham Accords are a major opportunity for Israelis and Arabs, and I think they represent an incredibly important milestone for the world as a whole.

I have been reading Arab media and government reactions to these accords, because these reactions are one gauge of how Israel's Arab partners view the situation. It's important to do this in order to avoid the kind of overly optimistic assessments about "the other side" that accompanied the Oslo Accords. What people say in their own press (especially in their own languages) can give a deeper sense of what they are thinking than western-focused reports in global media or sometimes-optimistic reports in Israeli news sources.

Arabic and French media responses in Morocco have changed over the last few weeks.

In the days after the Morocco-Israel announcement, there was virtually no commentary on the Israel deal per se on Arabic- and French-language Moroccan news sites; most ment ioned only that the US had recognized Morocco's claim to Western Sahara, but mention of the Israel relationship was either indirect or almost nonexistent; the word Israel did not always appear anywhere in these stories, and of course it never appeared in the headlines. In some cases, this lack-of-coverage was accompanied by articles insisting that Morocco was a strong supporter of the "Palestinian Cause", e.g. the king called Abbas.

That situation has changed.

For example, no stories about the Morocco-Israel renewal appear on the front page of the As Sabah news site, but the "Patriotism" or "Nation" section includes the following stories:

Moroccan-Israeli relations are a "historic" event that consecrates Morocco as a haven of peace (As-Sabah, Arabic)

This is the report on the comments by the Chief Rabbi of Panama.

I don't think I appreciated before how interested the Moroccan media is in opinions from Latin America. I know that the country had been engaged in a diplomatic push in Latin America to gain support for its claims to Western Sahara, but this makes at least 5 unrelated Moroccan news sites (in the Arabic, French and English languages) that are reporting on comments by Moroccan Jewish communities or experts in Mexico, Panama and now Argentina, praising the Morocco-Israel accord. These join reports on praise from American Jews, French Jews from Morocco, Moroccan Jews and Israelis of Moroccan descent.

The two agreements signed between Morocco and the United States of America, on the sidelines of the visit of the Israeli and American delegations to Morocco, will contribute to mobilizing financial resources amounting to 5 billion dollars, approximately 48 billion dirhams (4800 billion centimes).

Morocco likes to tout its long relationship with the United States, and in addition to rediscovering its ties to Israel's Moroccan Jewish community, the opportunity to refresh Morocco's ties with the United States and the US backing for its Western Sahara stance give Morocco a morale boost that should not be underestimated.

The photo accompanying this story, which was printed 2 days ago: 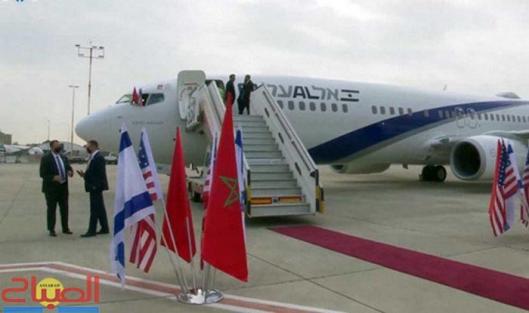 The American - Israeli delegation arrives in the Kingdom (As-Sabah, Arabic)

This was about a week ago.

His Majesty the King holds talks by phone with the Prime Minister of the State of Israel (Al Maghriba, Arabic)

The photo shows the king, but not Bibi. The article itself is moderately positive. It appears under "Royal Affairs".

Le Matin.ma has one report, also in the "Patriotism" section:

Signature of a joint declaration between Morocco, the U nited States and the State of Israel (Le Matin.ma, French)

This includes the full text of the Joint Declaration by Morocco, Israel and the US, translated into French.

This is a report about the virtual meeting between Morocco's Industry Minister and Israel's Amir Peretz.

Moroccan French business site La Vie eco has the Industry Ministers meeting at the top of the home page, but it is kind of a blurb.