How did the @StateDept bypass last year's appropriations bill, allowing funds to Jordan despite refusing to extradite Ahlam Tamimi? Will @ABlinken waive the requirement too?

Earlier this week, I wrote about the ‘Consolidated Appropriations Act, 2021’’ that:

While there are various strings attached to many of these programs, not a word is in the budget about conditioning aid to Jordan on its extraditing terrorist Ahlam Tamimi to the US.

I was wrong. There is a section of the Act that addresses this situation, without mentioning Jordan, which mimics language from the 2020 Appropriations Act:

SEC. 7055. (a) LIMITATION.—None of the funds appropriated in this Act may be used to provide assistance ...for the central government of a country which has notified the Department of State of its refusal to extradite to the United States any individual indicted for a criminal offense for which the maximum penalty is life imprisonment without the possibility of parole or for killing a law enforcement officer, as specified in a United States extradition request.
(b) CLARIFICATION.—Subsection (a) shall only apply to the central government of a country with which the United States maintains diplomatic relations and with which the United States has an extradition treaty and the government of that country is in violation of the terms and conditions of the treaty.
(c) WAIVER.—The Secretary of State may waive the restriction in subsection (a) on a case-by-case basis if the Secretary certifies to the Committees on Appropriations that such waiver is important to the national interest of the United States. 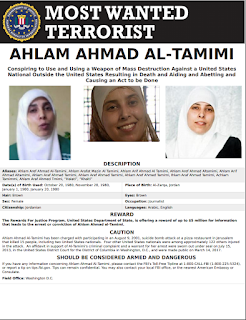 This year's bill is not yet signed into law, but last year's was, on December 20, 2019.
Which brings up the question: did Mike Pompeo sign a waiver for Jordan to continue to receive aid from the US even though they have refused to extradite Tamimi?
The language of the Act doesn't seem to allow for any other possibility. Yet that does not seem to be Pompeo's style.  Reporters at the State Department should ask this question of how exactly Jordan received funds despite its refusal to extradite Tamimi - if Pompeo explicitly authorized the waiver or if something was done further down in the State Department to quietly bypass the rule.
According to this Jordanian news article, some $845 million was given to Jordan in June, way ahead of its original schedule of the end of the year and part of the $1.2 billion given the entire year. It seemed to be done because there were noises from the Trump administration that it would stop aid to Jordan because of Tamimi so some people decided to send the money ahead of time to make any actions moot.
It seems some games were being played to avoid or obfuscate the restriction mentioned in the Act in 2020. And that is unconscionable.
With a new administration, assuming that this section of the Act survives the current attempts to modify it, next year we need to watch to see if Tony Blinken will sign such a waiver or if there are any other ways used to bypass the restrictions.  If Jordan continues to receive the $1.65 billion mentioned in the Act (a significant increase from 2020),  Blinken must be forced to publicly explain his reasons for going against the will of Congress - and why justice for terror victims is not considered a priority.
We have lots of ideas, but we need more resources to be even more effective. Please donate today to help get the message out and to help defend Israel.
Elder of Ziyon at Thursday, December 24, 2020
‹
›
Home
View web version