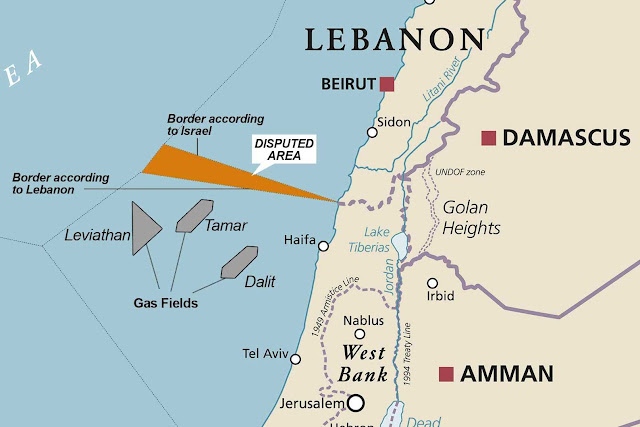 The Zionist newspaper Haaretz reported that prime minister Benjamin Netanyahu had warned the international oil firms against signing any investment contracts with the Lebanese authorities to excavate the seashore gas resources before the indirect UN-sponsored talks between Lebanon and the Zionist entity reach an agreement on the marine demarcation.
Netanyahu tried to blackmail the Lebanese authorities by saying that it is illogical for Lebanon to keep tens of billion dollars unused amid its economic crisis.

Lebanon needs money. It cannot get any energy revenue from sites that are in dispute because no energy company will spend millions to drill in an area where they might not have permission.

All of this is obvious, but Hezbollah calls it "blackmail."

And why can they not agree? The next paragraph explains it all:

Five rounds of indirect UN-sponsored talks between Lebanon and the Zionist enemy have been held in order to reach a final marine demarcation; however, the Israeli insistence on depriving Lebanon of around 2300 square kilometers of its territorial waters pushed the Lebanese delegation to reject any solution that denies the national rights.

When negotiations began, the disputed are was 860 square kilometers. Now, after several rounds of talks, Lebanon - instead of working towards compromise - changed its mind and decided to claim an additional 1440 km sq from Israel!

The Lebanese are attempting to claim some areas where Israel is already drilling, to help their bargaining position. They are the ones engaging in blackmail!

As always, Arab claims against Israel are projections of what the Arabs are doing themselves. And as has been the case with Israel enemies, their hate is so pathological that they happily would hurt themselves for the small chance of hurting Israel.

We have lots of ideas, but we need more resources to be even more effective. Please donate today to help get the message out and to help defend Israel.
Elder of Ziyon at Thursday, December 17, 2020
‹
›
Home
View web version