Gisha, an Israeli NGO ostensibly concerned with freedom of movement for Palestinians, proves again that its only purpose is to come up with new excuses to slander Israel, truth be damned.
This month it released a report that claims that Israel is discriminating against women in its policy on allowing Gazans to travel. Every single example of this supposed discrimination is fictional - they are all de facto consequences of Palestinian misogyny, not Israeli discrimination.
Here is every example of discrimination it mentions:
* Israel limits visits from Gazans to family members in the West Bank or Israel to specific events like funerals and weddings, spouses who are originally from the West Bank suffer. Nearly always, the spouse that moves away from home is the woman. So Gisha blames Israel for discriminating against women when Palestinian society forces women to be the spouse that moves away from home.
* The criteria for visits does not include visits for helping with difficult pregnancies' or childbirth. However, in a footnote Gisha admits that Israel amended that rule in response to a request from Gisha; it has not yet been implemented practically because of the pandemic.
* Gisha gives a few more technical examples, but then admits, that every example applies equally to both men and women but because women tend to move to be with their husbands' families they are the ones who are affected most.
* Israel makes it difficult for Gazans to travel abroad for education. Gaza women are less likely to seek to travel abroad. Therefore, somehow it is Israel's fault that so few women go to school abroad.
* The percentage of women who work in farms and fishing has plummeted from 36% before the Gaza closure to 4% now. Israel is blamed.
* Most women are employed in service professions like teaching and nursing. Israel doesn't give work permits for people in those jobs. So again, because Palestinian society imposes arbitrary rules on what jobs women can have, Israel is blamed.
* Israel allows Gazans with certain jobs to attend conferences outside Gaza. The professions allowed tend to be male-dominated, again because of Palestinian society misogyny. Israel is blamed.
Gisha refers to an Israeli document that outlines the criteria for travel between the territories and Israel.  It only mentions women specifically in that context for one instance: "Authorization for entry of aging Palestinians (men over 55, women over 50) with no need for a printed permit." Which means that the only official discrimination in Israel's travel rules is towards helping women travel more easily than men!
Moreover, Gazans who are allowed to travel to Israel or the West Bank to accompany children who need medical attention are far more likely to be women than men. Gisha doesn't mention that "discrimination" in their examples.
This is just another example of how NGOs lie in order to portray Israel as a monster. But in the case of Gisha, it is worse.
The co-founder of Gisha, Sari Bashi, tweeted this completely absurd and false accusation: 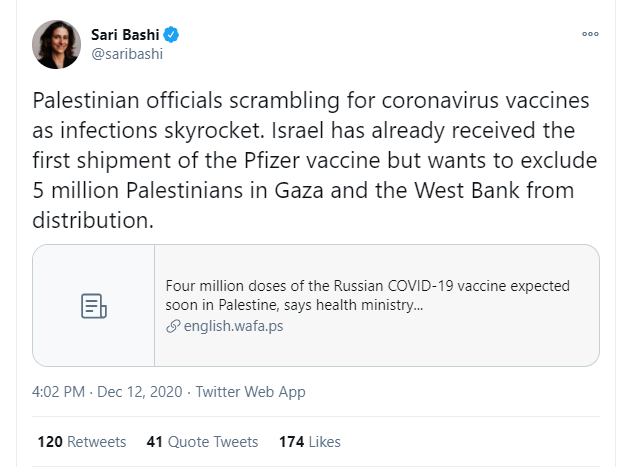 This is the opposite of the truth. Israel has been working with Palestinian leaders to provide millions of doses of vaccine, and Israel's Hadassah Hospital has been working with the UAE to bring in Russian COVID-19 vaccines that Israel has not approved but the PA has. The article she links to says nothing about Israel limiting vaccine access.
She simply made it up.
This is how credible Gisha and most anti-Israel NGOs are. They simply decide to accuse Israel of any crime and then they cherry pick factoids to support it - or they just lie. 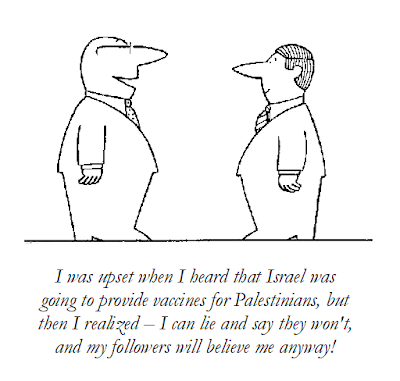 We have lots of ideas, but we need more resources to be even more effective. Please donate today to help get the message out and to help defend Israel.
Elder of Ziyon at Tuesday, December 15, 2020
‹
›
Home
View web version