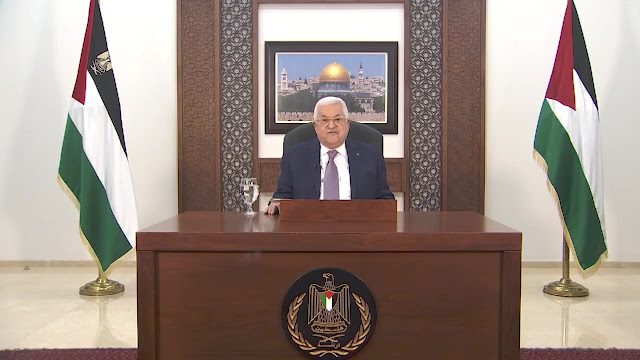 Mahmoud Abbas' annual Christmas message wasn't quite as obsessively about Israel as usual, but what he did say was offensive.

We face every day the policies of the Israeli occupation and its aggressive practices against our Islamic and Christian sanctities, the most recent of which was the attack on the Church of the Gethsemane in Jerusalem, in addition to the attacks on the Al-Aqsa Mosque, persecution, repression, and the herds of settlers.

He is blaming the arson attack on the church on Israel altogether.
He is saying Jews must be banned from visiting their holiest site.
He is claiming that Israel specifically attacks Christian and Muslim sites, trying to incite a religious war.

Despite all of this, we are steadfast, and are confident of victory and freedom, as we deserve justice for our cause, a decent life for our people and the end of the occupation, and our people gained their freedom and independence in their own state and whose capital is East Jerusalem, a state that is not separated by the racist walls of that holy city

.He is calling the separation barrier a "racist wall" - perhaps because it saves lives.
Because this is not nearly as offensive as his usual Christmas speeches, no one reports on this. But if a purported leader of an entity recognize by many as a state spouts lies, antisemitism and slander, it is newsworthy - even if it is only 60% as hateful as usual.
We have lots of ideas, but we need more resources to be even more effective. Please donate today to help get the message out and to help defend Israel.
Elder of Ziyon at Friday, December 25, 2020
‹
›
Home
View web version