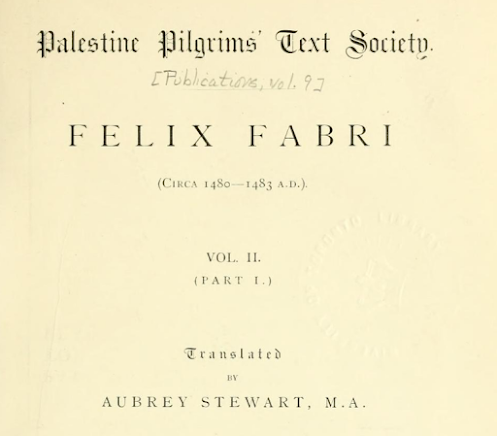 This is from a travelogue by a monk named Felix Fabri, describing his visit to the Holy Land in 1483. In this section he describes a tour of the area beneath the Temple Mount known as "Solomon's Stables" that was led surreptitiously by a Jewish guide.

On the fourth day, after dinner, we went down the Mount Sion together, led in a half-secret fashion by a Jew, who said that he would show us some things which were hidden. As we were going down, we came to the south side of the church, which stands near the Temple of the Lord, where, in the days of the Christians, there used to be a way up some stone steps to a high door, through which one entered that church. We climbed up to this door over the ruins of the walls, and kissed the wall in which the door is, for the sake of the plenary indulgences which are to be gained there (ff).... We visited this place with fear and in silence, for, had the Saracens [Muslims] seen us, we should have been in danger, which was why we chose the time when they take their rest. From that place we went further down, and came to an exceeding ancient wall, enormously strong, built of huge squared rocks, and this wall is tolerably high, albeit it once was much higher, as may be seen from the ruins, for the place is full of squared stones scattered round about. It is said that upon this wall stood the house of the forest of Lebanon, which was the king's house, built by Solomon, whereof we read in i Kings vii., where he saith, ' Glory,' etc. This house was called the house of the forest of Lebanon, because its upper part was built of timber which was hewn from the forest of Lebanon. The author of the Spccuhini Historiale says that this house was built of twofold material ; the lower part was of stone, and was called Nethota, that is to say, the place of perfumes, wherein the spices and pigments for the use of the temple and of the king's house were stored up, that by reason of the (cool) earth and the (thick) wall they might long keep their freshness. The upper part was of wood, of the timber from Lebanon, wherefore it was called the house of the forest, the house of Lebanon, or the house of the forest of Lebanon. ...
...When we had viewed this wall from the outside, guided by the Jew, we climbed up over the ruins to the wall itself, and there is one of the great square blocks which has been torn by vast force out of the wall, so that there is a hole through the wall into Nethotam. So we bent ourselves down and went in, one after another, and at first we could see nothing whatsoever, because it is the nature of the eyes that those who go into the shade out of the sunlight can see nothing ; but after we had stood still there for awhile, we got back our sight by degrees, and beheld great vaulted buildings. There were here seven rows of columns, supporting the vaults and upper buildings, which were built above them in the days of old, though at this day there stands an olive grove above it at the side of the temple. The Jews and Saracens say that these underground chambers were the stables of Solomon's horses....

Now, beneath these vaults there were many heaps of stones piled high up, whereof the Jew who brought us into that place told us that the Jews pile up these stones to occupy a place beforehand, for they hope that erelong they will again inhabit the Holy Land ; and therefore their pilgrims, who come from far countries, take places before- hand, in which places they hope that they shall dwell after the return. Above in the vault there is one place where a great hole is broken through, through which the Saracens cast down all the sweepings of the temple and courtyard. We were in great fear there, for had the Saracens found us there, they would indeed have treated us ill. Had we not been afraid, we might have climbed up over the rubbish into the courtyard of the temple. So when we had seen all the aforesaid sights, we went out through the hole by which we had come in, went round the Mount Moriah, which is the mount of the temple, and up the hill to the wall of the Holy City, as far as the corner where the east wall joins the south wall.

From here we see not only that many Jews would risk their lives to visit the chambers beneath the Temple Mount as late as the 15th century, but also that they hoped to see Israel rebuilt.
We have lots of ideas, but we need more resources to be even more effective. Please donate today to help get the message out and to help defend Israel.
Elder of Ziyon at Sunday, November 15, 2020
‹
›
Home
View web version