Richard Falk has found a place to publish his anti-Israel screeds: The Tehran Times 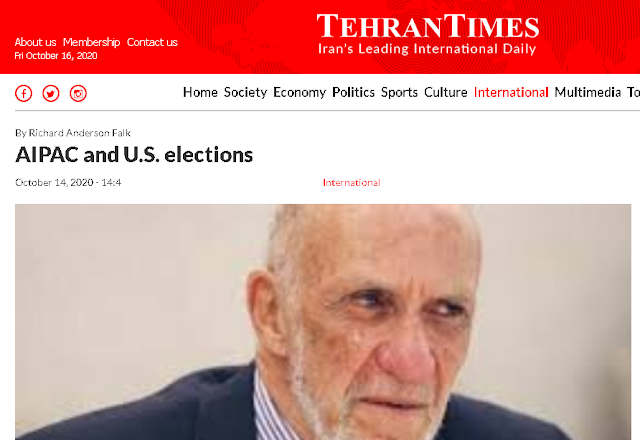 Richard Falk, the fanatically anti-Israel former UN “Special Rapporteur on the situation of human rights in the Palestinian territories occupied since 1967, has found a place to publish his pseudo-scholarly screeds.
The Tehran Times.
After being interviewed by the mouthpiece of the Islamist, terror supporting regime numerous times, now Falk decided to cut out the middleman and write for the mullahs himself.
In his article there this week Falk says how evil AIPAC is and praises the BDS-supporting anti-Israel Jewish Voice for Peace.

Part of the effectiveness of AIPAC is due to money and tight organizational discipline, and part of its influence is due to the absence of countervailing Jewish organizations that speak for liberal Zionism and progressive Jews. J-Street has attempted to provide a voice for liberal Zionism in Washington, and has limited success at legislative levels, but not in relation to party platforms or the selection of national candidates. Jewish Voice for Peace is an admirably balanced NGO, but its influence is mainly felt in civil society, where it has created growing support for a just outcome of this struggle that has gone on for a century, which includes supported [sic] the realization of the Palestinian right of self-determination whether in the form of a viable separate sovereign state or a single state whose foundational principle is ethnic equality.

Falk is such a moral paragon that he chooses to publish for a regime that hangs gays.

We have lots of ideas, but we need more resources to be even more effective. Please donate today to help get the message out and to help defend Israel.
Elder of Ziyon at Friday, October 16, 2020
‹
›
Home
View web version