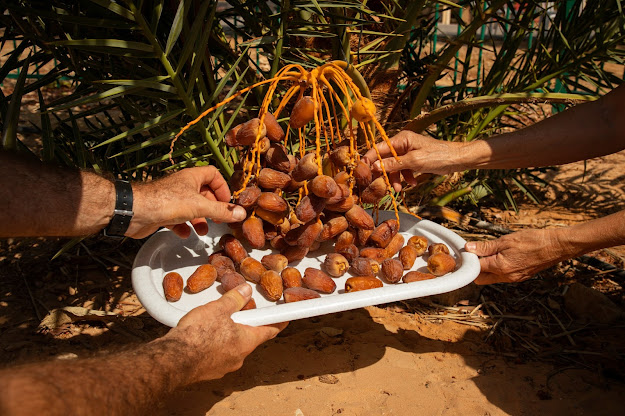 The New York Times has an interesting article about Israelis managing to harvest dates from the famous Judean date palm, planted with seeds that are over 2000 years old:

The plump, golden-brown dates hanging in a bunch just above the sandy soil were finally ready to pick.
They had been slowly ripening in the desert heat for months. But the young tree on which they grew had a much more ancient history — sprouting from a 2,000-year-old seed retrieved from an archaeological site in the Judean wilderness.
“They are beautiful!” exclaimed Dr. Sarah Sallon with the elation of a new mother, as each date, its skin slightly wrinkled, was plucked gently off its stem at a sunbaked kibbutz in southern Israel.
They were tasty, too, with a fresh flavor that gave no hint of their two-millenium incubation period. The honey-blonde, semi-dry flesh had a fibrous, chewy texture and a subtle sweetness.
These were the much-extolled but long-lost Judean dates, and the harvest this month was hailed as a modern miracle of science.

Where was the seed found again?

Hannah’s seed, which came from an ancient burial cave in Wadi el-Makkukh near Jericho, now in the West Bank, was carbon dated to between the first and fourth centuries B.C.E., becoming one of the oldest known seeds to have ever been germinated.

The phrase "now in the West Bank" is awkward - did the cave somehow move from Judea to the "West Bank"? But for the Times to more accurately say "now called the West Bank" would be problematic for a paper that chose to embrace that term only in the 1970s.
No one had ever heard of the "West Bank" before the 1950s, yet that Jordanian name is now considered the most accurate for media like the New York Times while "Judea" is considered a right-wing Israeli term created to supplant it. Articles like this are awkward precisely because they highlight that the land has always been associated with Jews, not "Palestinian" Arabs.
Luckily, the scientists who managed this remarkable feat aren't bound by the political correctness of using a brand new term for a Jewish historic area:

Ancient Judea was ideally placed between North Africa and Asia, along major trade routes, and the Romans, who traded all over the Mediterranean, could have brought western varieties with them to pollinate the older varieties from the east.
“Putting it simply, what do we find?” Dr. Sallon said. “The story of ancient Israel and the Jewish people, of diasporas, trade routes and commerce throughout the Middle East.”

(h/t Charlie)
We have lots of ideas, but we need more resources to be even more effective. Please donate today to help get the message out and to help defend Israel.
Elder of Ziyon at Wednesday, September 09, 2020
‹
›
Home
View web version