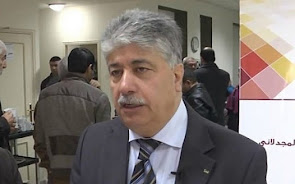 Preparations are underway to hold a meeting headed by President Mahmoud Abbas and with the participation of the heads of all the Palestinian political factions at home and abroad, today said Ahmad Majdalani, Secretary-General of the Palestinian Popular Struggle Front and Minister of Social Affairs in the Palestinian Authority.
He told the official Voice of Palestine radio that the meeting, which will be held between Ramallah, for the home-based leaders, and at the Palestine Embassy in Beirut, for the leaders in exile, seeks to reach a consensus on a national program to confront the US so-called deal of the century, Israel’s annexation plans and the normalization of Arab relations with Israel.
He stressed that this meeting is expected to strengthen the home front and pave the way for ending the inter-Palestinian division.
The meeting is scheduled to be held on Thursday.

This means that Mahmoud Abbas' PLO is meeting with internationally recognized terror organizations to come up with a response to Israeli peace with the UAE and potential peace with other Arab countries.
In fact, the head of Hamas' "political wing," Ismail Haniyeh, arrived in Lebanon on Monday to attend the Beirut meetings with the PLO and other factions. He already met with Hezbollah terrorists.

The group eschewed wearing masks as they stood shoulder to shoulder for this photo op, so perhaps some good will come from that meeting.

We have lots of ideas, but we need more resources to be even more effective. Please donate today to help get the message out and to help defend Israel.
Elder of Ziyon at Wednesday, September 02, 2020
‹
›
Home
View web version