Hey Palestinians - you could have had peace with Israel 20 years ago and chose terror. Actions have consequences. 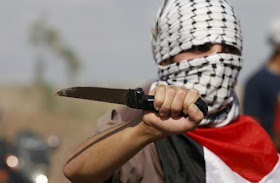 Hey Palestinians:
You keep whining about how the Abraham Accords ignore you.
That's wrong.
It treats you exactly how you deserve - as an entity that has, through your own actions and rejectionism, made your cause irrelevant.
You could have been the ones on the White House lawn signing a genuine warm peace with Israel, multiple times, since 2000.
Instead, you chose to adhere to your "principles" of destroying the Jewish state - through terror, through alliances with the worst human rights abusing states, through demographics of "return."
Israel's desire for peace with Palestinians is no less than its desire for peace with the rest of the Arab world. It tried since 1993. You guys chose differently.
You've had since 1993 to change your people's perception of Israel. Instead, you chose to teach your children hate. It took only two weeks for the UAE to change their textbooks to accept and embrace Israel as part of the Middle East - but your media and schools still teach that Jews are the usurping outsiders who will ultimately be banished.
Your revered leader Arafat was a terrorist who never changed, as the second intifada proved. Your quasi leader Abbas may reject outright terror but when given a choice of aligning with Israel or Hamas, he always chooses Hamas.
What message have you been telling Israel for 27 years?
You cry that the Gulf Arabs are stabbing you in the back. Yet they gave you billions of dollars and full support for decades. Instead of building a state and trying to make peace, you chose to make terrorists into heroes and to outsource the institutions of the state to European NGOs. You chose to join international conventions for the single-minded purpose of vilifying Israel.
Your choice to stick with your genocidal principles is what brought us to this day. You have squandered chance after chance for a state and for peace. Israelis would have been just as enthusiastic about peace with a Palestinian state as they are about peace with any Arab state. And you know this.
Even now, you refuse to take responsibility for your choices and you are now calling the UAE and Bahrain traitors. No - you are the traitors to the Arab nation by trying to hijack their agenda to be your own.
You could have had a state 20 years ago. You said no. The Arab world tried very hard to show you the folly of your decision. You stubbornly remained blind and deaf to what your brothers told you.
Time's up.
We have lots of ideas, but we need more resources to be even more effective. Please donate today to help get the message out and to help defend Israel.
Elder of Ziyon at Friday, September 18, 2020
‹
›
Home
View web version