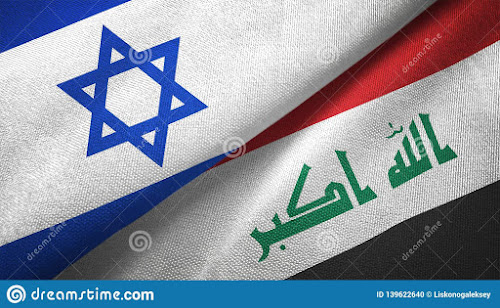 Sotal Iraq (Voice of Iraq) has been one of the most consistently antisemitic news sites in the Arab world.
It is absolutely shocking to see an article that is not only conciliatory towards Jews, but also to potential normalization between Iraq and Israel, published there.
Hamed Shehab writes first about the history of when Jews left Iraq:

Many Jewish men and their merchants had remarkable roles in the history of Iraq, with all Iraqi sects feeling their national belonging, and viewing the Jewish citizen is part of the fabric of Iraq...
These days, some Jewish personalities say they would like to preserve their Jewish heritage and property in Iraq, and that they would like to have contact, but without returning, and they are directing appeals through the international community and the United Nations...they wish to maintain a state of connection with their national heritage in Iraq, their synagogues, religious relics, manuscripts and documents of Jewish history, so that they can communicate with Iraqis through them, and they have a political legacy in Iraq.

Things get interesting as writes a tribute to Kol Yisrael radio in Arabic that morphs into a sense of desperation about the Arab world altogether:

We were in the seventies listening carefully to “Voice of Israel Radio” in Arabic, which devoted many of its programs to broadcasting the wonderful Iraqi songs and monologues, prepared by the Iraqis in the era of civilized Iraqi openness and its original creativity...There are cynical programs from the tendencies of some Iraqi politicians and their frequent repetition of the saying that the Jews should be thrown into the sea, fanning the flames of wars. Many Iraqis listened to the [Kol Yisrael]  programs in the sixties and seventies; they allocated a full hour per day at noon to Umm Kulthum’s famous songs, and other hours to Arab singers, many of them Egyptians, Syrians and from Gulf states, and these songs were presented in a way that makes you feel the value of the original Iraqi Arab heritage, at a time when Arab radio stations were busy with the clamor of battles and their military manifestos and their incitement to fight the Israeli enemy and how those wars witnessed victories and were then followed by defeats, in which the Arabs lost a lot, especially after the 1967 war, and that year produced a setback, rather a setback, until 1973, when Egypt managed to return the Sinai Peninsula to Egyptian sovereignty in the October War, which the Arabs used to sing about that it restored some hope to them that they could recover the rest of the lands, but this hope has subsided and diminished, and this dream is no longer possible, after years of war preoccupation with their internal and external wars their countries have broken up into entities divided on themselves, and instead of preserving the unity of Iraq and the unity of Arab countries, our countries were divided into states and sub-states, and the dream of regaining what remains of occupied lands is gone, never to return !!

And then comes the part that would have been inconceivable to be published in any Iraqi media a month ago:

These days, the discussion of the possibilities of "normalization" between Iraq and Israel began as if it were a conversation that establishes a "preparatory" stage. The state of popular rejection has begun to diminish, especially after the neighboring countries started tampering with the capabilities of Iraq and dominating its people, and want to turn it into a village or province affiliated with them. And everyone wants to devour the Iraqi body, according to its national and religious components, so that they will be able to dominate its capabilities, and the situation of the Iraqi components continues to suffer from paralysis, tensions and political strife, as if the Iraqi sects have turned into pawns in the hands of politicians, everyone wants to drag his audience to the camp closest to him religiously or nationally. The talk about “normalization” as if it was a normal matter might find its echo in the next few years, because “normalization” is no longer a “taboo”.  ...How many Iraqis wished to establish relations with various countries of the world, including Israel, if that relationship gives them back some of their prestige? They may prefer to seek the help of the foreigner, even if it is counted from the enemies, against those who try to break the will of the Iraqi citizen and violate his dignity, and they find in establishing a relationship with Israel and America, which can reduce the weight of the interference of neighboring countries, and they find Western support of Israel what can provide safe havens for the Iraqis, away from the hustle and bustle of wars, their sick language and their broken records, where these voices find nothing but the alienation, sickness, and even disgust of many Iraqis, and they are on the side of those who help them against those who target their dignity and those who want to shed the blood of the people of the country, to employ it in his dirty wars, on his behalf, so that the Iraqis would be fuel for those wars in which they have no interest.
Perhaps the Kurdistan region was the forerunner in establishing communication relations with Israel, and those relations have existed since the fifties, and the Kurds found in Israel that it is the one who facilitates the task of separating from Iraq and establishing a Kurdish state....The matter of thinking about “normalization” with Israel is no longer regarded as impossible, or falling within “taboos”. Rather, “normalization” and even establishing semi-normal relations may be closer than many imagine!!

This is absolutely mind-blowing.
We have lots of ideas, but we need more resources to be even more effective. Please donate today to help get the message out and to help defend Israel.
Elder of Ziyon at Monday, September 07, 2020
‹
›
Home
View web version