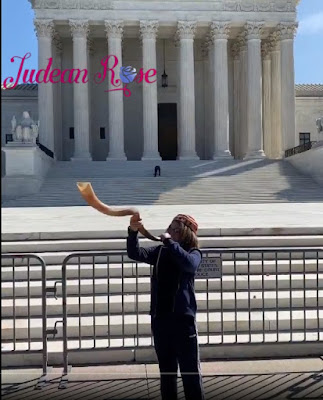 Ruth Bader Ginsburg, Supreme Court justice, died on Rosh Hashanah. What gets lost in the sauce, in all the coverage of the more “Jewy” aspects of RBG’s passing, is the fact that it was also Shabbat, since the first day of Rosh Hashanah this year fell on the Jewish Sabbath. It’s understandable that people give more import, emotionally, to Rosh Hashanah, which, after all, is one of what we call the "High Holidays." But the fact is that Shabbat actually takes precedence over Rosh Hashanah, which is why Orthodox Jews don’t blow the shofar on Rosh Hashanah when it coincides with the Jewish Sabbath, because it is forbidden to carry items from place to place on Shabbat. None of this stood in the way, however, of several prominent Jews marking RBG’s death by blowing the shofar on Shabbat Rosh Hashanah.

Rabbi Matt Soffer, of Judea Reform Congregation in Durham, North Carolina, heard the news Bader Ginsburg's death on Friday night. “The news brought me to my knees and I wept,” said Soffer, who determined to find a way to commemorate his icon, who according to the JTA, “had come to represent the liberal American feminist spirit for so many.”

By the time Soffer signed on for services on Saturday morning, he had resolved to address Ginsburg’s death with his community. He did so by revising not the words he had prepared or the prayers he would lead, but by tweaking a core tradition of the High Holidays: the shofar blasts.

Just as the Supreme Court has nine members, one of the shofar blasts, teruah, has nine short notes. Soffer halted after just eight to symbolize the fact that the court has just lost a member who made it complete and, he said, “to honor the speechlessness of our communal grief.”

Actor Mandy Patinkin, who not so long ago made it onto my Comprehensive List of Antisemitic Celebrities, also blew the shofar, this time to underscore RBG’s deathbed wish, dictated to granddaughter Clara Spera: "My most fervent wish is that I will not be replaced until a new president is installed."

Thus it was that Patinkin blew the shofar on MSNBC on Shabbat Rosh Hashanah. “And I want her wish to be heard, so I will blow the shofar for her,” said Patinkin with a lot of put-on pomp and circumstance, blowing a pretend tekiyah gedolah as a sort of dog whistle to Jewish Democrats. “And so now her wish will be heard,” announced the BDS-supporting anti-Trump actor, “and let it be heard throughout the land.”

Well, here's @PatinkinMandy blowing the shofar on @MSNBC to attempt to ensure that RBG's dying wish is heard. pic.twitter.com/T7jAa6SfKY

11-year-old Micah Blay was driven by his mom Dana Marlowe from their home in a Maryland suburb (on Shabbat Rosh Hashanah) to blow the shofar for 250 people outside the Supreme Court, in Washington, D.C., which he said was, “definitely like kind of scary.”

May her memory be a blessing...a revolution...a revelation...a call to action with the blast of the Shofar on the steps of the Supreme Court on Rosh Hashana. #rbg #RBGRIP #RuthBaderGinsburg pic.twitter.com/Fe7rACmJMa

“[We] were literally dipping ceremonial apples into honey” at the start of the Rosh Hashanah holiday “when my phone started blowing up” with messages.

Marlowe tweeted that she was “devastated” to hear of Ginsburg’s passing and decided immediately to make a pilgrimage to the Supreme Court the following day, the first day of Rosh Hashanah.

“It was shock and heartbreak and I couldn’t believe it,” she said.

Micah added that the family was “doing the right thing” in deciding to spend one day of Rosh Hashanah in front of the Supreme Court honoring “a great person” like Ginsburg.

The blowing of the shofar at this time of year calls Jews to repentance. What is repentance? It is being sorry for sinning, and having done something contrary to Torah law, resolving not to do it again.

Everyone has their own way of doing things, honoring the people they admire, and making a point about the things they believe. But I wonder if these people realize how insensitive is this act, the act of blowing a shofar on Shabbat, to their coreligionists, those still faithful to Torah precepts upheld for thousands of years. I wonder how “liberal” it can be to cause so great an offense to the sensibilities of the Orthodox who watch on in dismay at the seeming disregard for God’s Torah without the least little care or concern for their beliefs, and the hurt these actions cause.

Ruth Bader Ginsburg was a giant by any measure. But it does no credit to RBG, no honor to her Jewishness, to expropriate a religious vessel and to use it in an inappropriate way to mark her passing. My hope in writing this here is not to shame anyone, God forbid, but in hopes that the shofar not be abused this way in future.

Gmar Chatima Tova. May you be inscribed for good.

UPDATE: A reader pointed out that the reason we don't blow the shofar on Shabbat is because it is forbidden to carry the item to the synagogue, similar to the reason we don't use the lulav and etrog on Shabbat Sukkot. The text has been updated to reflect this important correction.
We have lots of ideas, but we need more resources to be even more effective. Please donate today to help get the message out and to help defend Israel.
Varda Meyers Epstein (Judean Rose) at Wednesday, September 23, 2020
‹
›
Home
View web version