Abbas made a speech at the UN with his usual lies and threats to world peace. No one cared. 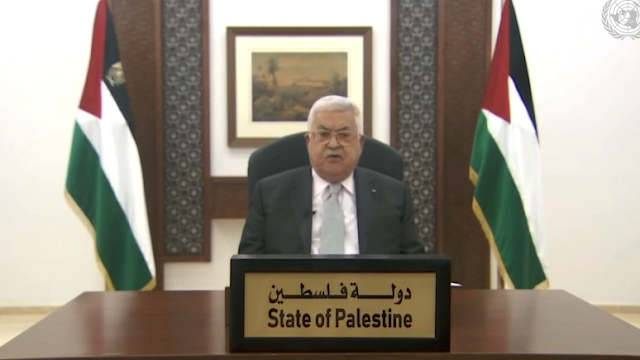 While Mahmoud Abbas' speech to the UN on Friday generated very few headlines, it is worth analyzing.

Ladies and Gentlemen,
The Palestinian people have been present in their homeland, Palestine, the land of their ancestors, for over 6000 years, and they will continue living on this land, steadfast in the face of occupation, aggression and the disappointments and betrayals, until the fulfilment of their rights.

It is insane that this lie continues to go unchallenged in mainstream media. No respectable historian claims  that today's Palestinian Arabs have anything to do with ancient Canaanites. Yet the head of a purported state has no problem telling the world this absurd lie. (Although it is not as ludicrous as Saeb Erakat's 9000 years.)

We have always sought a just, comprehensive and lasting peace, and we have agreed to all the initiatives presented to us. I have personally dedicated my life to achieving this desired peace, notably since 1988, followed by the Madrid Conference and the Oslo Accords in 1993, and to this very day.

Well, except for rejecting all of them that involved any compromise.

Finally, it announces normalization agreements with both the UAE and Bahrain, in violation of the Arab Peace Initiative, and the terms of reference of a comprehensive, lasting and just solution in accordance with international law.

It is notable that he didn't attack Bahrain and the UAE for violating the Arab Peace Initiative - but Israel, which never agreed to it. Perhaps Abbas realized that his attacks on Gulf Arab states did not have the desired effect.

The Palestine Liberation Organization has not given a mandate to anyone to speak or negotiate on behalf of the Palestinian people ...

Actually, they have. They outsourced all negotiations to the EU, the UN, the Obama administration, while they sat back and waited for pressure to collapse Israel.

In this regard, I call on the Secretary-General of the United Nations to undertake, in cooperation with the Quartet and the Security Council, preparations to convene an international conference with full authority and with the participation of all concerned parties, early next year, to engage in a genuine peace process, based on international law, UN resolutions and the relevant terms of reference, leading to an end the occupation and the achievement by the Palestinian people of their freedom and independence within their State, with East Jerusalem as its capital, on the 1967 borders, and resolving all final status issues, notably the question of the refugees, based on resolution 194.

This is a meaningless appeal to try to look like Abbas has something new to say, while trying to get back to getting the world to pressure Israel.

Let everyone know there will be no peace, no security, no stability and no coexistence in our region while this occupation continues and a just, comprehensive solution to the question of Palestine, the core of the conflict, remains denied.

As he has done so many times before, he is threatening terror if Palestinians don't get what they want.

In Palestine, ladies and gentlemen, there is a living nation, creative, civilized, peace-loving, aspiring passionately to freedom. A nation that has been able – despite the occupation that besieges our lives – to build an active and modern society, that believes in democracy and the rule of law and has been able to preserve its national existence and identity despite all the political and philosophical differences between its diverse components. Here we are, despite all the obstacles that you know too well, preparing ourselves to hold parliamentary elections, followed by presidential elections, with the participation of all factions and political parties.

Will this be the time they have elections when the last dozen times they promised elections didn't pan out? Well, since they believe in democracy, no doubt.

We have lots of ideas, but we need more resources to be even more effective. Please donate today to help get the message out and to help defend Israel.
Elder of Ziyon at Sunday, September 27, 2020
‹
›
Home
View web version