The World Health Organization has a series of dashboards showing the spread of COVID-19 worldwide.

Its dashboard for the Eastern Mediterranean region is interesting: 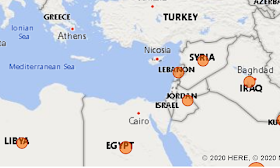 Yes, Israel is not included as a place where there are any COVID victims.

While WHO is part of the UN, and the UN does not include Israel in various Middle Eastern categories because of the refusal of much of the Arab world to sit with Israel in committees, this has nothing to do with public health. When using data to monitor and help stop the spread of a virus, geography is more important than politics, and in normal times there is some travel between Israel and Egypt, Jordan and the Palestinian-controlled areas.

Leaving Israel out of the region is politicizing health, and this is unacceptable.

But WHO does even worse.

Here are its numbers for "occupied Palestinian territories." Look at the footnote. 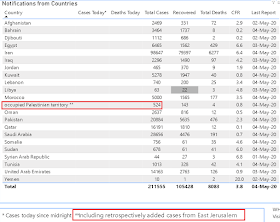 They are counting "East Jerusalem" cases as Palestinian, even though the area is not under Palestinian Authority control and therefore the numbers are meaningless. This is a health crisis, and as such the data is meant to show what nations are doing to combat it. "Palestine" has no control over treatment or even counting the number of cases in the portions of Jerusalem that were under Arab control for 19 years. These numbers are not only deceptive, but double-counted, since Israel already counts them.

The Palestinian Authority coronavirus page makes the distinction between the cases registered under the Palestinian Ministry of Health and the numbers of Jerusalem Arabs that they hear about second-hand. 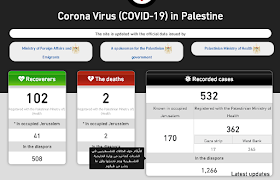 Every other dashboard I've seen uses the numbers from the Palestinian Ministry of Health and doesn't include "East Jerusalem."

It makes no sense for an international health organization to count according to its own political biases rather than according to the areas of control.

Furthermore, the WHO page for "occupied Palestinian territory" includes a map that somehow counts the highest number of cases as being in "Jerusalem" as opposed to "East Jerusalem." 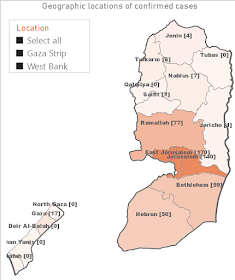 Apparently, the PLO has a very expansive definition of "Jerusalem" that reaches the Jordan River - and the WHO uses it, no question. (Perhaps this can be leveraged to have Palestinians build a capital city in far-far-east-Jerusalem as shown here.)

Finally, check out the absurd map of "Europe region" by WHO that includes Israel as a tiny island with no neighbors: To play politics with health is to prioritize politics over health. The UN shows that its hate for Israel is more important than providing accurate information during a pandemic.


We have lots of ideas, but we need more resources to be even more effective. Please donate today to help get the message out and to help defend Israel.
Elder of Ziyon at Tuesday, May 05, 2020
‹
›
Home
View web version