From the British census of Palestine in 1922, which put the population of the Beersheba district at 75,254:

The Ottoman authorities in 1914 placed the tribal population of Beersheba at 55,000, and since that date there has been a migration of tribes from the Hejaz and Southern Transjordan into the Beersheba area mainly as a result of succession of adequate rainfalls and of pressure exerted by other tribes east of the River Jordan.

That is some 20,000 Arabs who came from southern Jordan and from the Hejaz area of Saudi Arabia to settle in Beersheba, increasing the population there by close to 40% in a few years.

People tend to forget that Arabs (especially the Bedouin represented here, but also other Arabs) never considered any national boundaries as being meaningful. They freely moved from one area to another. We’ve noted this before with a major influx of Arabs from the Hauran area of Syria in the early 1930s because of a drought: 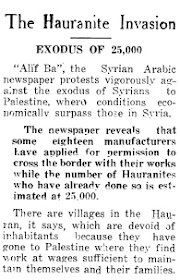 What do all of these people have in common?

They are all considered “Palestinians” today, and to have lived in Palestine for centuries beforehand.

In fact, a significant number of Arabs who lived in Palestine in 1948 were there for far less time than the 72 years since.