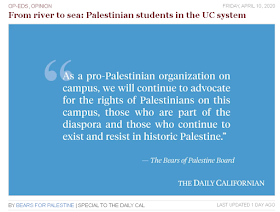 In The Daily Californian, the group "Bears for Palestine" not only support terrorist Rasmea Odeh, but they also explicitly justify all Palestinian terrorism:

It signals power and privilege to presume that individuals are “terrorists” without first asking what forces them to resort to protests. To individuals who seek to teach us oppressors’ morals, we respectfully say we do not take orders from colonizers. To quote the anti-colonial phenom Frantz Fanon: “When we revolt, it’s not for a particular culture. We revolt simply because, for many reasons, we can no longer breathe.”

Khaled was the notorious airplane hijacker involved in the 1969 TWA Flight 840 and El Al flight 219 in 1970. Bernawi attempted to bomb a cinema in Jerusalem.

Notice that the justification by the Bears of Palestine for the terror acts of these two women can extend to the most depraved acts of terror imaginable - if Bernawi is justified in her attempt to blow up people watching a movie, then any murderous act against any civilians is justifiable as long as it is called a mere "protest." ISIS beheadings are no different than suicide bombings which are no different than cinema bombings.  9/11 was justified by Osama Bin Laden for the US "occupation" of Arab lands. Every terrorist can justify his or her acts because of "oppression." And certainly all terrorists can claim that they are oppressed by the people they want to blow to smithereens.

If some acts of terror are justified, all acts of terror are justified. The question is why the University of California continues to allow students who have admitted that they consider terror to be justifiable to congregate on campus. After all, this article does not make a distinction between non-violent protests and crashing airplanes into buildings. Perhaps they would consider throwing grenades into the office of the Dean to "bring attention" to the high price of textbooks, that might be considered extremely offensive to those who cannot afford them. I can see nothing in the Bears for Palestine justification of murdering Israeli Jews that does not preclude justifying campus terrorism as well.

Students with such a twisted view of morality are a danger to everyone on campus. And those who read this letter and think there is nothing wrong with the sentiments expressed have already been brainwashed into accepting the Palestinian narrative that all violence is justified.


We have lots of ideas, but we need more resources to be even more effective. Please donate today to help get the message out and to help defend Israel.
Elder of Ziyon at Sunday, April 12, 2020
‹
›
Home
View web version