On this Palestinian Prisoners Day, the explicit support of terror and terrorists as well as explicit lies by Palestinian media and NGOs is the norm, as they demand Israel release terrorists.

Some of the memes being tweeted glorify terrorists:

Some pretend that Israel imprisons pre-teens, which is a lie (as is the "12,000" figure and the "violence" statistic.) 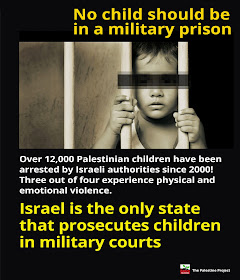 And none of them are murdered, nor is there medical negligence:

And yet other memes are accidentally funny:

But the most offensive meme comes from Addameer, which describes itself as a "Prisoner Support and Human Rights Association." It tweeted this video showing an Israeli soldier tossing a COVID-19 "grenade" into a cell of a cowering Palestinian.


Addameer is widely respected, with its bogus statistics quoted by the UN, Time magazine and Jimmy Carter.  They are the source of the lie of "over 800,000 Palestinians have been imprisoned" as well as "40% of Palestinian adult males have been arrested."

Now they are posting blood libels as memes. And none of the so-called "Jewish" anti-Israel groups will say a word.


We have lots of ideas, but we need more resources to be even more effective. Please donate today to help get the message out and to help defend Israel.
Elder of Ziyon at Friday, April 17, 2020
‹
›
Home
View web version