Here was an absurd headline from the Financial Times last week: 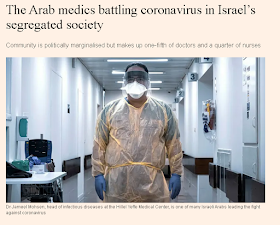 The article's bias is truly insane:

Arabs make up only a fifth of Israel’s population, but represent half the country’s pharmacists, a quarter of its nurses and just under a fifth of its doctors, according to the Central Bureau of Statistics. Some of the nation’s largest hospitals have Arab doctors heading major departments, and the country’s leading virologist is Arab.
...
In Kafra Qara, an Arab town south of Haifa with so many medical professionals that residents call it the city of doctors, Jameel Mohsen was more critical.

“As an Arab, other jobs are closed off to us, so we became doctors,” he said, peeling off layers of protective equipment after setting up a Covid-19 ward at the Hillel Yeffe Medical Center, where he is head of infectious diseases.

If anyone can find any minority group complaining that they are over-represented in the medical professions as evidence of discrimination, I'd love to see it.

Of course, there are no professions in Israel where Arabs are not allowed. There are lots of Arab police officers. There are many Arab engineers and programmers and research scientists. Once, the acting president of Israel was a Druze Arab.

While FT claims that the over-representation of Arabs in the health sector somehow shows how Israel is discriminatory, Gulf365 has a very good article for its Arabic-speaking audience about how Arab doctors are essential in battling the coronavirus in Israel. The article bullet points are:

* Coronavirus placed Arab doctors on the social and political map of Israel
* Dr. Shukri Awawdeh: The Arabs constitute a great professional force within the health system in Israel, where they constitute 20% of its employees.
* The Corona crisis faces the Israeli public, Jews and Arabs alike, with a higher common goal: eliminating the epidemic and saving lives
* Hundreds of Arab doctors hold high positions in the hospitals of the Hebrew state  ... and the state of emergency confirms that there is no room for racism and exclusion, but for solidarity
* Since the virus outbreak, Arab doctors have turned into the most prominent segment of Israeli society
* Without medical and health employees from among the Arab community and without cooperation between them and the Jewish community, the endeavors to save lives in Israel would have received a fatal blow.
* Arab medical staff serving professionally and with dedication the general public are able to enhance the confidence and cooperation of the Jewish public towards the Arab public.
* Arab physician Heba Ziad: She saved 16 Coronavirus patients who arrived at the hospital in a critical condition

When European media is more anti-Israel than Arab media, there is a big problem.

We have lots of ideas, but we need more resources to be even more effective. Please donate today to help get the message out and to help defend Israel.
Elder of Ziyon at Sunday, April 19, 2020
‹
›
Home
View web version