Fifth Circuit throws out challenge to anti-BDS law in Texas 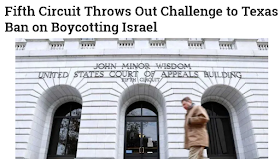 In litigation challenging a Texas law blocking state agencies from hiring companies boycotting Israel, a Fifth Circuit panel ordered the case be dismissed Monday but declined to decide if the law is constitutional.

Bahia Amawi, a Palestinian U.S. citizen, had worked for the Pflugerville Independent School District for nearly a decade as a speech therapist for kindergarteners when the school district offered to renew her contract for the 2018-2019 school year.

She refused due to a new clause in the contract requiring her to certify that she does not boycott Israel nor would she do so while working for the school district.

Eugene Kontorovich, who advised on the anti-BDS legislation, tweeted:

Just to review the state of play: a year ago, lots of folks were trying to scare Congress by hysterically claiming that federal courts were striking down anti-BDS laws. None of those rulings stands after appeal, and only non-vacated ruling is federal court in Arkansas upholding anti-BDS law.

While this is good news, people are still misrepresenting this case, including in this article.

Her arguments were absurd:

She said in court filings she refuses to buy Sabra brand hummus due to its connections with Israel and only buys Palestinian olive oil. Sabra is owned by the Israeli company Strauss, which has publicly stated it donates food to the Israeli Defense Forces.

The statement Amawi is required to sign does not stop her from boycotting Sabra hummus. She is free to buy Palestinian olive oil, even for her salads she eats while at the schools.

As David Bernstein - not a fan of these kinds of laws - wrote in 2018, here is what she was asked to sign:

"Boycott Israel" means refusing to deal with, terminating business activities with, or otherwise taking any action that is intended to penalize, inflict economic harm on, or limit commercial relations specifically with Israel, or with a person or entity doing business in Israel or in an Israeli-controlled territory, but does not include an action made for ordinary business purposes;and

Every reporter got this wrong because Glenn Greenwald in The Intercept falsely claimed that Amawi "refused to sign an oath vowing that she 'does not' and 'will not' engage in a boycott of Israel." That is false. There are no restrictions on Ms. Amawi's free speech rights nor her right to personally boycott Israel or even for her to write articles advocating BDS. And, as Bernstein notes,  "it's nearly impossible to think of a way in which Ms. Amawi's speech pathology business would ever have an opportunity to in any way boycott or otherwise economically harm Israel, rendering this pure political theater."

We have lots of ideas, but we need more resources to be even more effective. Please donate today to help get the message out and to help defend Israel.
Elder of Ziyon at Tuesday, April 28, 2020
‹
›
Home
View web version