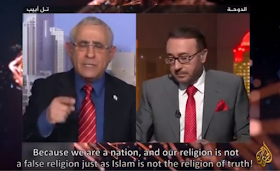 There was a nice detail in a much longer antisemitic article in Jordan's Al Ghad about how Jews constantly attack Muslims.

Many of those who ignite these conflicts are Jewish social media people and their weapon is rumor and lies, and unfortunately, many Muslims - individuals, groups and countries - accept this pernicious approach!
...
The ugliest of all is what Al-Jazeera in particular did to help Jews penetrate the minds of Muslims by opening the way for them to promote their falsehood through its pulpit, and the crime of Al-Jazeera grows when it deliberately brings a weak opponent before the trained Jewish who is professional in promoting falsehood, which is the primary media game in directing and misleading the masses.

If you have the time, you can see one of these beatdowns, with Mordechai Kedar speaking after Trump first said he intended to move the US embassy to Jerusalem.

We have lots of ideas, but we need more resources to be even more effective. Please donate today to help get the message out and to help defend Israel.
Elder of Ziyon at Friday, March 13, 2020
‹
›
Home
View web version