The UN Human Rights Council is frightened of a garage

The UN Human Rights Council published a blacklist of 112 companies it says are conducting business in West Bank settlements, and it said the companies’ activities “raised particular human rights concerns.”

Needless to say, there is no international law prohibiting companies from doing business in disputed or even "occupied" territories. They do it all the time, all over the world.

One of these evil Jewish human rights violators on the blacklist is Mayer Davidov Garage, which repairs cars and trucks.

One of its garages is in Atarot, and another in Mishor Adumim, which the UN considers "illegally occupied territory."

In 2017, and perhaps still today, the garage hosted a backgammon tournament for Arabs and Jews to help the two communities get to know each other better. Here's a photo of the event. 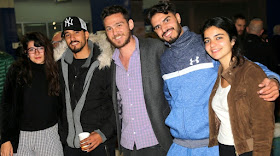 Mayer Davidov did infinitely more for peace between Arabs and Jews by hosting just one backgammon event in their garage than the UN Human Rights Council has done in its entire history.

(Correction: I originally wrote that their Talpiot location was the one the UN considered to be in a settlement. h/t YK)

We have lots of ideas, but we need more resources to be even more effective. Please donate today to help get the message out and to help defend Israel.
Elder of Ziyon at Wednesday, February 12, 2020
‹
›
Home
View web version