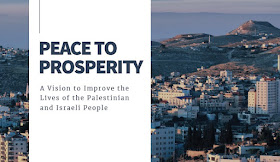 The "Peace to Prosperity" plan was doomed from the start. But it has, and will continue to, achieve a great deal.

It puts Palestinian political positions, which have been mostly aligned with the UN and Europe, on the defensive. They kept saying that they have international law on their side, but international law that is only enforced against Israel is not international law. Now there is a serious plan and pathway to peace and the Israel haters are forced to respond.

For the most part, the responses have been boilerplate. Absurd charges of it being an "apartheid plan" or "a one-state solution" are obviously not true to anyone who reads it, but these are the knee-jerk reactions because the usual suspects are waiting for some anti-Israel academic to come up with smarter counterarguments. (Both Human Rights Watch's Ken Roth and former HRW member Sarah Leah Whitson linked to Arab League description of the plan as "apartheid" as if that charge had validity.)

Many of the objections have been to the plan being seen as pro-Israel. Yet Palestinians were invited to participate, and moreover they are being invited to participate now to push back on whatever they want. They are refusing and this indicates not only that they do not have an answer to the plan, but they didn't even have a plan to respond to it with two years' notice. Without a counter-proposal (beyond the mantra of "1967 lines, capital in Jerusalem, right of return") they they prove they are not serious about peace.

Moreover, Jared Kushner's direct rebuke to the Palestinians for not accepting any previous plan is prompting an interesting response from many: they are saying that the previous plans were equally unsatisfactory, even though they were much more direct paths to an independent Palestinian state. It is easy in an era of Trump Derangement Syndrome to push back on the Trump aspect of the plan - many people would reflexively oppose anything with his name anyway.  But when they say that the Clinton and and Olmert plans (as well as the Obama/Kerry framework), all rejected by Palestinians as vehemently as this one, are equally bad, they expose the truth that they were never interested in peace with Israel but in Israel's surrender. If Palestinians spurred peace ideas from the great liberal hero Obama, they will never accept peace.

Trump  has changed the debate from the old, tired "Israel must do more for peace" to "Palestinians must do something for peace." When the response is dismissive, even though some parts of the plan are clearly advantageous to them, it shows the world that they aren't serious players.

The most salient point is that the plan is aimed at helping the Palestinian people more than any previous plan has. When their leaders reject it out of hand, they are saying that the status quo- which they cry to the world is unlivable - is suddenly much better than a plan that gives them more than double the land they have, the ability to live without a single Israeli checkpoint, the ability to freely go to Gaza, and Gaza would have triple the land it currently has, as well as many other economic incentives. Palestinian leaders could try to grab their gains and negotiate for more - if they cared about their people. Palestinians already don't like their leaders and those that read the plan will have more reason to distrust them. (Incidentally, the Hamas-oriented Al Resalah actually translated the entire plan to Arabic and published it.)

So even if the plan fails as a roadmap to peace, the effects are wholly positive. It shifts the focus and the onus on the Palestinians, whose main response is "rage" and "less cooperation with Israel" even if that hurts their people. It exposes the truth about Palestinians to the world, including many of their Arab brethren. The Arabs pay lip service to the Palestinian cause but for the most part they have not gone beyond that for many years.