Palestinian schools teach that "the first historian was Palestinian," "A Palestinian Roman expelled Jews from Jerusalem"

As I was researching the broadcast announcements in Palestinian Arab schools I came across this one from 2017 that has a "Did you know?" section about how important Palestinians have been in history.

2- Did you know that the Palestinian emperor of Rome was the one who ordered the expulsion of the Jews from Jerusalem due to their lack of politeness and their hatred against Christianity and Christians at that time?

Palestinians are trying to take credit for expelling Jews from Jerusalem - for the crime of being "impolite!"

In reality, the emperor who expelled the Jews from Jerusalem in 136 CE was Hadrian, born in Italy.

3- Did you know that the first historian in the world is Syoss Cassiros, who is Palestinian and whose book Pleistino is still preserved in the Louvre Museum ..


They appear to be referring to Simonides of Ceos (who was a poet, not a historian) and possibly his book now known as the Palatine Anthology of which part of it is in Paris. Simonides was born in Greece, not "Palestine." 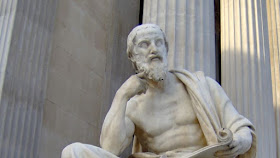 The first historian is generally agreed to be Herodotus.

This seems to be the quality of a Palestinian education.


We have lots of ideas, but we need more resources to be even more effective. Please donate today to help get the message out and to help defend Israel.
Elder of Ziyon at Tuesday, February 25, 2020
‹
›
Home
View web version