Bloomberg was mostly right about Gaza in 2014

Peter Beinart points to a 2014 interview with Mike Bloomberg about Israeli actions in Gaza during the last war. 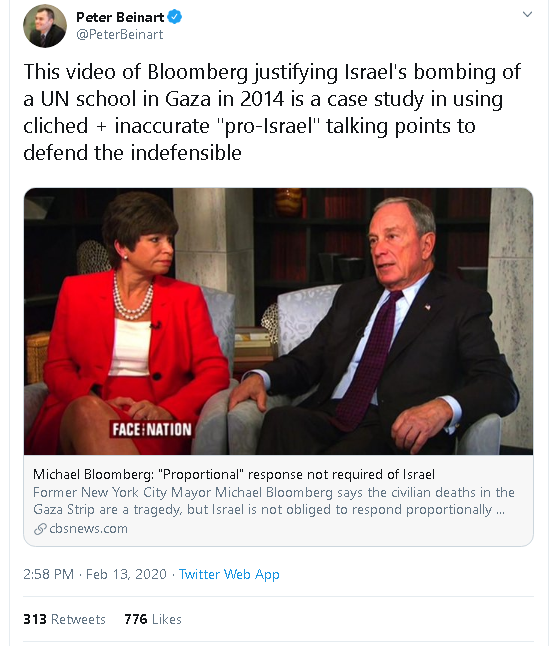 Bloomberg defends Israel (and even refers to Israel as "we") when he discusses the shelling of a UNRWA school in July:

Bloomberg is correct in saying that Israel has every right to attack the spot where they are being attacked from. He should have told the interviewer when she asked about the Geneva Conventions and an incident at a UNRWA school where some 15 were killed that Israel was fully within its rights under international law to attack a military objective, and that civilians in the area do not make a military objective immune to attack unless the expected collateral damage is disproportionate to the military advantage.

No one knew it at the time, but Israel did err in its attack. After four years of investigation, Israel admitted that a mortar or mortars that was meant to be shot at a target 130 meters away from the school had accidentally hit the school. Israel admits it was aware of the school and that the only civilians in the area were there, and it had no intention of attacking it. Decisions in the heat of wartime are made by the best available information that the commander in the field has, and the errant shells were not anticipated, so there is definitely no violation of international law here.

Here are the results of Israel's investigation into the incident, which gives an idea of how thorough the investigations are (and how Beinart and Human Rights Watch and others simply assume Israel is a bloodthirsty tyrant intent on murdering innocents.)

As previously reported in media reports, in reports and complaints from an international organization and from NGOs received by the MAG Corps, it was alleged that an IDF strike in the vicinity of an UNRWA school in Beit Hanoun on 24 July 2014, at around 1500, resulted in the deaths of 15 persons, as well as injuries to others. Subsequently, the incident was referred to the FFA Mechanism for examination.

The factual findings collated by the FFA Mechanism and presented to the MAG, indicated the existence of grounds for a reasonable suspicion that the incident involved a deviation from the rules and procedures applicable to IDF forces. As a result, the MAG ordered a criminal investigation into the incident.

The investigation that was conducted was thorough and comprehensive. Testimony was obtained from numerous IDF soldiers and officers, as well as from seven Palestinians. Moreover, the investigation reviewed materials from the IDF’s relevant operational systems, witness affidavits received from Palestinians, and more. Additionally, video clips, radio communications and pictures were obtained, some of which was given to the investigating authorities by UNRWA and an NGO.

Documents reviewed in the course of the investigation showed that on 10, 17, and 20 July 2014, mass messaging was directed at the residents of Beit Hanoun through leaflets, radio and television broadcasts, telephone calls and voice messages, all calling on the residents to evacuate from the area. The evacuation was called for due to the IDF’s intention to enter the area for the purpose of locating and neutralizing a cross-border assault tunnel that, according to the information available to the IDF, originated in the Beit Hanoun area and ran into Israeli territory.

According to the testimony of commanders and soldiers, the civilian population did indeed evacuate from the area, and no civilians were identified during the ensuing fighting – with the exception of the civilians taking shelter in the UNRWA school, which was known to the IDF to be operating as a shelter for civilians who had evacuated their homes. It was also found that the commanders of the force tried to bring about the evacuation of the school, in order to avoid harm to those therein in light of the fighting that was occurring in the area, and that many attempts were made to try and coordinate the evacuation of the school and the transfer of civilians to a different shelter in a more remote area.

On the day of the incident, in the early morning hours, the IDF began advancing in order to clear enemy forces from the area. IDF forces came under heavy attack from enemy forces, who fired anti-tank missiles, small arms fire, and sniper fire against IDF forces. During the maneuver, IDF forces identified explosive devices embedded in the area next to the school. [That is a blatant violation of international law that is completely ignored by the Israel haters - EoZ.]While the forces were engaged in neutralizing the explosive devices, they were fired upon from a number of structures, resulting in injuries to an officer and to a soldier. A short time later, another unit was fired upon from the same area.

Following the combat, IDF forces evacuated the injured and moved back to defensive positions. Shortly thereafter, an order was given to fire towards the area of combat, in order to prevent the persistent enemy fire on IDF forces, and to facilitate the forces’ re-entry into the area.

The investigation's findings provide that the commanders who ordered the fire assessed that, with the exception of the school, the area was devoid of civilians. Accordingly, the precautions taken during the firing were mainly aimed at preventing harm to the school, and at reducing the risk of civilian casualties. The findings also provide that the forces were instructed to avoid any possible harm to the school and the civilians therein, and that the central consideration in choosing the impact point for the fire was ensuring strict compliance with safety margins from the school.

The forces directed mortar fire at an impact point located approximately 130 meters away from the school’s boundary (a distance significantly greater than the relevant safety margin). The firing was conducted using a single mortar so as to increase accuracy, and while employing visual surveillance and shells with the lowest possible potential to cause damage.

In retrospect, it turned out that three of the shells landed within the school grounds and hit persons located therein. The investigation materials showed that this outcome was not foreseen in real-time by the IDF forces, and was caused due to an unintentional and unexpected deviation of the shells from the intended impact point.

When it was discovered that the school had been hit, all forces in the area were instructed to cease fire immediately, and coordination efforts were undertaken to facilitate the passage of supply and medical vehicles into and out of the school.

As a result of this event, the IDF implemented operational lessons-learned, which were intended to reduce the risk of such incidents occurring in the future.

It should be noted that, in the course of the investigation, allegations were raised by various sources that a mortar shell or rocket fired by a Palestinian terror organization hit the school. No evidence was found to corroborate these allegations.

After reviewing the investigation's findings, the MAG found that the firing procedures in question accorded with Israeli domestic law and international law requirements. The decision to fire was taken by the competent authorities, for a clear military purpose, and the fire was aimed towards a source of persistent enemy fire emanating from a number of different locations in the area, which put the forces in clear danger. The attack complied with the principle of proportionality, as despite the outcome of the attack, which was only discovered in retrospect, at the time the decision to attack was taken it was estimated that no collateral damage to civilians was expected to result, and certainly no excessive collateral damage was expected. This estimation was not unreasonable under the circumstances. In addition, the attack was carried out while undertaking several precautionary measures aimed at preventing harm to civilians, including the use of the most precise munitions available to the forces, and the use of visual surveillance. The MAG found that the professional discretion exercised by all the commanders involved in the incident was not unreasonable in the circumstances. The fact that civilians uninvolved in the hostilities were harmed as a result of the attack, which was not expected at the time the decision to attack was made, is a regrettable result, but does not affect the legality of the attack ex post facto.

Accordingly, the MAG ordered that the case be closed without any further legal proceedings – criminal or disciplinary – to be taken against those involved in the incident.

The only part I don't understand is how three shells hit the school when only one was supposed to be fired at the legitimate target. But the MAG investigations, when read all together, shows how careful the IDF is in battle and how it keeps records of virtually every bullet. When the IDF is involved, it says so - and when it is not, it says that as well, as was the case of the nine women who the IDF found were in fact killed by a terrorist bomb (#3 in the link.)
We have lots of ideas, but we need more resources to be even more effective. Please donate today to help get the message out and to help defend Israel.
Elder of Ziyon at Friday, February 14, 2020
‹
›
Home
View web version