Anti-Zionism explained in Yoram Hazony's The Virtue of Nationalism 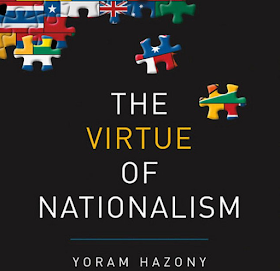 I enjoyed reading Yoram Hazony's The Virtue of Nationalism. I want to center this review on Hazony's theory of modern anti-Zionism.

To oversimplify, the book is a defense of nationalism as opposed to imperialism. Nationalism is defined as being loyal to one's nation and letting other nations do their own thing; each nation is free do decide on the best way to govern yet each maintains its own national character. Imperialism is a philosophy where the ideas of one nation are imposed on others that might have different ways of thinking because the ideas are superior to all others, so imposing them is for the greater good.

Modern Europe is in many ways a response to Nazism; the horrors of Hitler were so great that we must do everything possible to avoid anything that resembles it in the slightest. But Europe, specifically the EU, makes two very horrible mistakes.

One is that they look at Nazi Germany as being the outcome of extreme nationalism. Because of that, they regard all nationalisms with suspicion at best and hostility at worst.

Yet Nazi Germany was not nationalist - despite calling itself National Socialism. Nazi Germany was imperialist. The Third Reich was meant to rule over Europe and to impose its racist and antisemitic philosophy worldwide.

The EU's connection between nationalism and Nazism is completely wrong.

The second mistake is that the EU, by trying to impose a single standard of law and regulations across Europe, is imperialist itself!  The irony of an imperialist Europe, being largely led by Germany, as an answer to the imperialist Third Reich, is painful.

(The major difference between the two is that Europe has effectively outsourced its defense to the United States, so in that way it is a protectorate. Yet its philosophical underpinnings are imperialist.)

Europe looks at Israel as a nationalist endeavor - which it most certainly is. (Hazony brings much evidence that early philosophers of nationalism got their ideas from the Biblical description of the Jewish kingdoms, where individual tribes banded together for defense, one of the major functions of a nation.) Since Europe is traumatized by World War II and mistakes Nazism as nationalism, it views Israel as a potential nationalist danger.

Hazony makes a stark distinction between what lessons Israel and Europe learn from the Holocaust. Israel looks at the slaughter of Jews and says that a national entity could have defended them; Europe looks at the same slaughter and says that Nazi "nationalism" is the cause and that is what must be stopped to ensure it doesn't happen again.

In both paradigms, the fact of Israel takes on an extraordinary significance because of the identity of the Jews as the victims of the Shoah. For Israel's founders, the fact that the survivors of the death camps and their children could be given weapons and permitted to train as soldiers under a Jewish flag seemed a decisive movement of the world toward what was just and right. It could in no sense make up for what had happened. But it was just nonetheless, granting the survivors precisely the empowerment that, had it come a few years earlier, would have saved their loved ones from death and worse. In this sense, Israel is the opposite of Auschwitz.

At the same time, Israel takes on extraordinary significance in the new European paradigm as well. For in Israel, the survivors and their children took up arms and set themselves on a course of determining their own fate. That is, this people, so close to the Kantian ideal of perfect self-renunciation only a few decades ago, have instead chosen what is now seen as the path of Hitler—the path of national self-determination. It is this that lies beneath the nearly boundless disgust so many feel toward Israel, and especially toward anything having to do with Israel's attempts to defend itself, regardless of whether these operations are successful or unsuccessful, irreproachable or morally flawed. In taking up arms in the name of their own national state and their own self-determination, the Jews, as many Europeans and others now see it, have simply taken up the same evil that led Germany to build the camps. The details may differ, but the principle, in their eyes, is the same: Israel is Auschwitz.

Therefore, Hazony stresses, it doesn't matter what Israel does or doesn't do - its very existence as a nation willing to defend its people is proof of its inherent immorality.

Antisemitism is not the driving factor of anti-Zionism, according to Hazony. He says that Europe is also antipathetic towards all (European-origin) nations that embrace nationalism. This is why they are so upset at Britain after Brexit, at Trump's America, at some eastern European countries - because those countries insist on making their own national decisions and not to be bound by the rules and international institutions and protocols and standards pushed by Europe (e.g., the ICC, the Kyoto Protocol.). I am reminded of the Carter-era US arguments when abstaining from the 1980 UNSC Jerusalem resolution that emphasized how the portion that demanded that no country establish embassies there was an unacceptable violation of national sovereignty. To the Left, every nation must give up some independence to be part of the world community, and the US has always resisted that  to varying degrees.

I'm not so sure that antisemitism is not a major factor in European anti-Zionism - it seems to me the vitriol against Israel by the European Left is much greater than that against the US or Britain. But Hazony's theory is intriguing.

As far as non-European countries such as Arab nations are concerned, Hazony claims that Europe and the Left subconsciously do not consider them to be full nations but savages. In this, they are recalling Kant, who theorized three stages of mankind's development, from savages to nations to a higher moral order where all nations federate under one rule of law. European anti-nationalists look at themselves as being at the highest level, at the US, Israel and Britain at the second level, and the rest of the world still at the level of savages, from whom nothing can be expected. I'm not so convinced of this argument; it seems to me that the anti-colonialism of the Left is driving them to regard all non-whites as noble people whose immorality is the fault of the West.

It is always a treat to read Hazony. And this is a very important book.

(Naturally, any mistakes in summarizing Hazony's arguments are mine alone.)

We have lots of ideas, but we need more resources to be even more effective. Please donate today to help get the message out and to help defend Israel.
Elder of Ziyon at Wednesday, February 19, 2020
‹
›
Home
View web version