I had seen similar reports but this specific one is new to me.

It shows that Arabs flocked to Palestine because of Jewish economic success, and that there was essentially no negative effects of Jewish immigration.

Arab villages near Jewish population centers were shown to have improved in every way compared to the villages further away, which looked as they were a hundred years beforehand.

Similarly, Arab houses near Jewish communities went up in value, those further away lost value.

Some of it is a little hard to read, and most of it was not digitized. 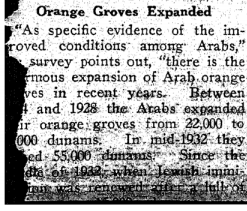 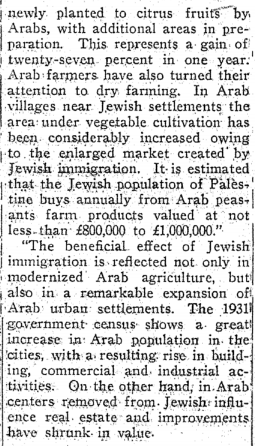 The rest of it is in the JTA digital archives:

The beneficial effect of Jewish immigration is reflected not only in modernized Arab agriculture, but also in a remarkable expansion of Arab urban settlements. The 1931 government census shows a great increase in Arab population in the cities, with a resulting rise in building, commericial and industrial activities. On the other hand, in Arab centers removed from Jewish influence real estate and improvements have shrunk in value.

ARABS SWARM HOLY LAND“The most convincing proof of the economic improvement experienced by the Arabs is the fact that formerly thousands of Arabs emigrated annually. Today Arab immigrants are drawn to Palestine from other countries. Between the censuses of 1922 and 1931 the Arab population grew by 225,000, or forty percent. A further illustration is the sharp reduction in the number of nomadic Arabs. These inveterate wanderers of the desert cannot resist the powerful attraction of the thriving urban and rural settlements where the opportunities for labor are, due to Jewish enterprise, plentiful.

“Moreover, the benefits from Jewish immigration are not exclusively of an economic nature. Practically the entire government appropriation for education goes toward the maintenance of Arab schools. The Jews support their educational system from private funds. As a result illiteracy is disappearing among the Arabs. Of even greater benefit to the Arabs have been the Jewish medical services. The prevalence of trachoma, malaria, enteric diseases and typhoid has shown a steady decline in the last decade.

A LABOR SHORTAGE“Not only is Jewish immigration being speedily absorbed, but there is a shortage of labor, both Arab and Jewish necessitating the importation of Jewish immigration has resulted in an increase of the number of Arab industrial workers. From 1924 to 1928 their numbers rose by about 6,000, of whom 2,000 were employed in Jewish enterprises, representing twenty percent of the employees of Jewish capital, while the Arabs employ practically no Jews.”


We have lots of ideas, but we need more resources to be even more effective. Please donate today to help get the message out and to help defend Israel.
Elder of Ziyon at Tuesday, February 04, 2020
‹
›
Home
View web version