When Israel makes life easier for Palestinians, it rarely makes the news. 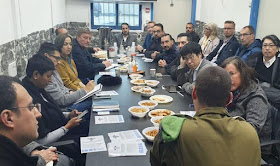 COGAT announced last week when describing a tour of Qalandiya crossing to a group of international visitors:


The Civil Administration has advanced its “Door To Door” project throughout the West Bank this past year. Thanks to this unique project, Palestinian trucks can carry merchandise into Israel without long and exhaustive checking at the crossings, instead relying on modern technology. This project advancement has shortened the crossing time for merchandise by two thirds while saving money, resources, and precious time.​

Also earlier this month the Gisha NGO sent a letter to Minister of Defense Naftali Bennett -widely regarded as an anti-Arab zealot - asking him to allow tires into Gaza, as tires have been banned by Israel since April 2018 in response to Gaza riots that burned hundreds or thousands of tires at the border. This is a humanitarian issue, Gisha emphasized.

Because the media ignores stories like these, the Arab and anti-Israel narrative that Israel wants to arbitrarily hurt Palestinians is the only one people can read and watch. But Israel is only concerned for its own security, and always has been - if there are ways to ease Palestinian suffering without affecting security, Israel has shown that it is willing to spend hundreds of millions of dollars to do so.

We have lots of ideas, but we need more resources to be even more effective. Please donate today to help get the message out and to help defend Israel.
Elder of Ziyon at Tuesday, January 28, 2020
‹
›
Home
View web version