Sarah Halimi: Getting Away With Murder in the Land of Dieudonné (Judean Rose) 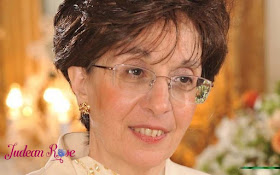 Sarah Halimi’s murderer will not stand trial because he was deemed too high on marijuana to be responsible for his actions. Kobili Traore, age 29, beat Halimi, age 65, for an hour. The neighbors could hear her screaming as Traore beat her. They could also hear him screaming abuse at her. “Shut your mouth,” he screamed. “Allahu Akbar.”
And then, as he threw her out the window, “I killed the Shaitan!”
Shaitan, in case you were wondering, is Arabic for Satan.
This all happened on April 4, 2017. Three days later, Prosecutor François Molins said the “act” would not be considered an antisemitic murder. It took five more months for Molins to officially declare the murder an antisemitic crime, perhaps because enough people made enough noise that he simply had no choice.
And now, two years later, the murderer is getting off scot-free.
Do we buy the idea that marijuana made him do it—made Traore violent?
No. We don’t. Not only because marijuana is more likely to make a person eat a lot of Doritos and crash on the sofa than to cause a person to toss a nice older woman out a window. But because it’s France. La Monde didn’t publish the story until June 23, almost three months later. That was around the same time the family of Sarah Halimi lodged a complaint because the police weren’t doing anything. They weren’t bothering to investigate the murder. Which is probably why the murder was not declared antisemitic until the outcry of the public became too loud for the courts to ignore.
So no. We totally don’t buy that Traore was just way stoned when he did what he did and only needs a spot of rehab. We, the Jewish public, know that Traore murdered Sarah Halimi because antisemitism is endemic to his culture, to people from Muslim countries. Traore beat Halimi and threw her out a window because to him, Jews aren’t even people.
They are the Shaitan.
Of course it’s not that there’s no evidence that marijuana can’t make a person violent. We can Google the science as well as the next person. There’s the 2016 study that shows changes in brain function for habitual users which suggests a correlation between violent offenders and marijuana use. And there’s the 2017 study that shows an increase in violent behavior in former mental patients who smoke pot.
But we don’t much care about any of that or give credit to the significance of these studies. We’re not buying that Traore had a “delirious episode.” What we really think is that smoking pot gave Traore the chemical courage he needed to finally off that nice Jewish lady who had always been so kind to him. Traore needed to get way buzzed in order to obscure Sarah Halimi’s humanity. So he could do what he needed to do, raised as he was in a milieu that sees the Jews as the devil in disguise, the Shaitan. Satan.
Because without a few hits of strong marijuana, she was just that nice neighborhood lady with the beautiful shy smile, a mother and grandmother, a doctor. Sober, she was impossible to kill. But with a buzz on? It made it infinitely easier for Traore to do what he’d always been taught to do.
Kill the Jews.
Well, all’s well that ends well. Traore smoked up, got really baked, tossed that Jew Shaitan out the window, and won’t even have to serve time. Because France understands these things. France gets how a poor Muslim immigrant might need to blow off a bit of steam here and there.
Which is why, two years before Traore murdered Halimi, Farid Haddouche, a Muslim with no previous history of mental illness, was deemed unfit to stand trial after stabbing Jews in Marseille. And why Abel Amastaibou, another Muslim with no prior history of mental illness, was also deemed unfit to stand trial for the stabbing death of Sebastian Selam in 2003. Amastaibou told his mom he was “going to heaven,” so his intention to become a shahid, a Muslim martyr, was crystal clear. France, however, protects its immigrants and Muslim citizens. Not so the Jews.
The Jews will complain about the unfair ruling in the case of Sarah Halimi, but then, they always do. And when they see that this is the end of the story, they’ll have to quiet down. Because there’s nowhere else to go with this. The appeal was turned down. And the media has already moved on to something else.
Only the most stubborn Jews will persist in remembering that gentle smile, and the way Sarah Halimi, a doctor, took the time to mentor Kobili Traore, the man who got away with her murder. No one else will care enough to wonder at a court that says a few hits on a bong makes a person not liable for his actions.


Especially not in the land of Dieudonné.
We have lots of ideas, but we need more resources to be even more effective. Please donate today to help get the message out and to help defend Israel.
Varda Meyers Epstein (Judean Rose) at Wednesday, January 08, 2020
‹
›
Home
View web version