Last week, in commemoration of the 75th anniversary of the liberation of Auschwitz, world leaders gathered in Jerusalem. Listening to the speeches, it was obvious the intent was to go beyond just commemorating and remembering the past. There was a growing apprehension about the future and the increase in antisemitism.

And not just about Europe.

The increase in reported incidents of antisemitism in the US is beyond shocking. It goes beyond graffiti, protests and harassment. It goes beyond college campuses. Jews are being physically attacked and murdered, both by fanatics on both the right-wing and the left-wing too.

Jews are being attacked in New York City -- by blacks.
And those who would be expected to provide protection and address the problem are not as forthcoming as one would expect.

The media may report what is happening, but begrudgingly mention the attacks by blacks in New York City, and even then, many in the media are trying to find ways to excuse it, blaming the attacks on the Hasidic victims, on gentrification.

Then there are the political leaders, who have been excruciatingly slow to address the problem. Some in Congress have insisted that antisemitism cannot be singled out as a problem, but rather must be packaged with 'Islamaphobia" and other forms of hate. Others have taken advantage of the crisis in order to score political points, whether to blame Trump or single out the right-wing as the sole source of the hatred.

The lengths to which the media and politicians will go to craft a narrative to suit their purposes comes up in a review in The Wall Street Journal earlier this month, of the book "Wilmington's Lie", by David Zucchino, about the 1898 massacre of blacks in Wilmington, N.C., by members of a white-supremacist conspiracy. The book reveals what happens when the media and politicians ally with each other, leading up to the massacre and in covering it up afterward.

At the time, in addition to 3 of Wilmington’s 10 aldermen being black, there were black health inspectors, postmasters and magistrates, and a black street superintendent and county treasurer. The American Baptist Publication Society called Wilmington “the freest town for a negro in the country.”

According to the article:

Other key offices, such as those of the mayor and police chief, were held by white Republican or fusionist allies. Contrary to later racist propaganda, the city was well run. It was the very presence of blacks in positions of power that was intolerable to leading Democrats, who began railing against “Negro rule.”

This led to heated and racist rhetoric and worse. In this regard the review makes reference to Josephus Daniels, the influential editor of the Raleigh News and Observer:


His race baiting and fake “reporting” fueled the savagery of the white mobs. “White supremacy” has today become something of a buzzword in the debate over racial inequities: In the Wilmington of 1898, it was a proud battle cry.

Daniels would later serve as Secretary of the Navy under Woodrow Wilson. He was a close friend of Franklin Roosevelt, who appointed him ambassador to Mexico. A cruiser launched in 1963 bore his name.

When Alex Manly, the editor of Wilmington’s black newspaper, the Daily Record, denounced the routine charges aimed at black community -- such as that blacks were rapists worthy of lynching --  there were outright calls for Manly's murder while a local paper, The Messenger, claimed that Wilmington was suffering from a massive crime wave (a claim that has been proven to be a complete fabrication):

“The Sambos do not wait to be threatened or assaulted but they take the initiative and assault to kill from the start.”

The newspaper went on to claim that blacks were stockpiling arms, that nannies were planning to poison the white children in their care and to set their homes on fire.

That November, on election day, blacks were blocked at gunpoint from the polls, where ballot boxes were openly stuffed. In one case, a Democrat won with 100 more votes than the total of registered voters in his precinct. Similar tactics brought Democrats overwhelming victories across much of North Carolina. One newspaper proudly declared: “Our state redeemed—Negroism defunct.”

And then came the massacre.

What came next was an organized riot, one that, as Mr. Zucchino conclusively shows, was planned even before the stolen election as a decisive coup de grâce to what remained of the biracial fusion movement. On streetcars, on horseback and on foot, hundreds of armed men poured into Wilmington from outlying towns, “stoked with adrenaline . . . and eager for an opportunity to shoot black men,” in Mr. Zucchino’s words. Many of them, known as “Red Shirts,” wore red calico blouses or red jackets over white butterfly collars, with cartridge belts around their waists. They shot their guns into black homes, fired on blacks standing on street corners, and burned the office of the black-owned Daily Record. Alex Manly had already fled north or he would have been lynched.

Later, white officials claimed that their actions were necessary to quell “Negro riots.” In reality, what took place was a slaughter. One white man was overheard to say to another as he fired, “We are just shooting to see the n—s run!” White housewives brought the shooters coffee and hotcakes. Meanwhile, hundreds of black women and children fled to the surrounding swamps in terror. By the time it was all over, at least 60 black men lay dead and many others wounded.

Every member of Wilmington’s fusion government, white and black, was forced to resign. In their place, 8 white supremacists, including 2 men who had led the rioters, were chosen as alderman. Col. Alfred Waddell, who had called for black voters to be shot, was selected as Wilmington’s mayor. Not one of the rioters was ever charged with a crime.

“With the killings completed and their enemies banished,” Mr. Zucchino writes, “Wilmington’s whites began crafting a lasting narrative of a heroic victory over dark and malevolent forces.” Later reports in the white press typically asserted that black men were the aggressors.

...In the years that followed, whites shamelessly rewrote history to incorporate racist tropes. In the 1930s, one popular writer asserted that Wilmington’s whites had to act because “black rapists prowled the city...attacking Southern girls and women.” And as late as 1949 school textbooks portrayed the insurrectionists as heroic defenders of law and order.

All this is not meant to demonize Democrats or the Democratic Party.

But it is interesting to note in passing the story of William Holden, the governor of North Carolina, from 1868-1871. 1870, in response to the assassination of Republican senator John W. Stephens months earlier, Holden called out the militia against the Ku Klux Klan, imposed martial law in two counties, and suspended the writ of habeas corpus for accused leaders of the Klan. This became known as the Kirk-Holden war.

For his efforts, the Democratic-controlled House of Representatives impeached Governor Holden on December 14, 1870.

Holden was later posthumously pardoned -- by the North Carolina Senate, in 2011.


Today, we may take some comfort from the fact that the rhetoric aimed at Jews is not as heated or as debased as what Blacks faced in 1898 -- that is, unless you take a look at what appears on social media. Under the banner of 'free speech,' community and political leaders such as Sarsour, Omar and Tlaib consider themselves free to make various any of a number of baseless claims against both Jews and Israel.

And if the lack of backlash against them is any indication, they really are free to say anything.

In an article, Anti-Zionism has a death toll, Hen Mazzig notes that one of Sarsour's favorite memes has gotten Jews killed:

David Anderson, one of the Jersey City kosher supermarket shooters, posted, “Jews were using the police to [carry] out a well planned agenda [against black people]” to a thread discussing the 2016 police killing of Alton Sterling.

...One of the more prominent anti-Zionist organizations spreading this theory is the ironically-named Jewish Voice for Peace, which developed a campaign called “Deadly Exchange” to scapegoat Israel for police brutality in the United States. JVP claims that Israel is the root of anti-black police brutality, with practices that include “extrajudicial executions, shoot-to-kill policies, police murders, racial profiling, massive spying and surveillance, deportation and detention, and attacks on human rights defenders.”

Another leader of the anti-Zionist movement, former Women’s March co-chairwoman Linda Sarsour, called the anti-Semitism watchdog Anti-Defamation League, “An organization that takes police officers from America ... to Israel so they can be trained by the Israeli police and military, and then they come back here and do what? Stop and frisk, killing unarmed black people across the country.”

Sarsour’s fellow co-chairwoman Tamika Mallory has taken this conspiratorial rhetoric a step further. When Starbucks announced it planned to work with the ADL on anti-bias training, the activist demanded the public boycott the coffee conglomerate because Jewish organizations like the ADL are “CONSTANTLY attacking black and brown people.” When asked to clarify how, she wrote, “The ADL sends U.S. police to Israel to learn their military practices. This is deeply troubling.”

Then, there is Hanan Ashrawi, Chairman of the Board of Directors of Miftah, which Elder of Ziyon revealed in 2013 posted on their website an article accusing Jews of using Christian blood on Passover. Just last year, the Miftah website claimed that Israel steals the organs of Haitian and Ukranian children.

When Rashida Tlaib and Ilhan Omar announced their trip to Israel, they arranged it through Ashrawi and her Mitah organization.

Now Tlaib and Ashrawi have made news again this past weekend, doing what they do best: accusing Israel of killing non-Jewish children. 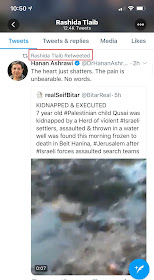 There was outrage -- on social media.
From politicians?
Not so much. 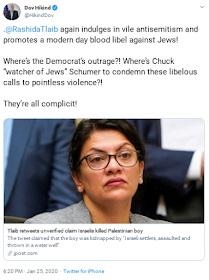 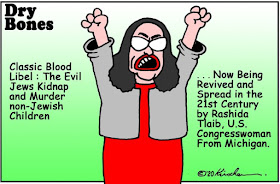 And what they do and say is important, relevant -- and dangerous:

Ashrawi apologized for her tweet, not whole-heartedly ("not fully verified"; "not certain"), but she apologized.
Tlaib just deleted her retweet, with neither comment nor apology.

It is only a matter of time before she will say or write another biased, derogatory accusation against Israel.

What happened in Wilmington seems long ago and far away. And it may be true that today such blatant, open and over-the-top attacks on blacks -- and Jews -- may be a thing of the past.

But then you read the stories about the increase in antisemitism.

And you read that the increase is not just in campus harassment, or verbal assaults on clearly identifiable Jews or the number of swastikas that are being spray-painted.

Synagogues around the world are being protected by the police and armed guards. My synagogue has been redesigned with reinforced metal doors with combination locks, special fobs and synagogue volunteers who will let you into the synagogue on Shabbos -- if they recognize you.

If the overt attacks by the politicians and the mainstream media are a thing of the past, their silence and foot-dragging in dealing with the rapidly increasing problem are very much a problem today.

With the increasingly vocal hate and the killing of Jews that is tied to it, maybe there really is not that much difference between Sarsour, Representative Tlaib and Representative Omar -- and their allies -- and the Wilmington racists after all.

All the more need for the media and political leaders to wake up.

Today, International Holocaust Remembrance Day, would be a good day to start going beyond just words.


We have lots of ideas, but we need more resources to be even more effective. Please donate today to help get the message out and to help defend Israel.
Elder of Ziyon at Monday, January 27, 2020
‹
›
Home
View web version