Iran claims victory in the Honor/Shame Theater - and to all appearances, Trump's calculations were correct

On Thursday night, in the wake of the US killing of Qassam Soleimani, I wrote:


I do expect a response - Iran is still an honor/shame society and some action, now that the US admitted its role, is deemed necessary. But I think it will be a limited response. Perhaps cyberattacks, perhaps  rockets to Israel as I mentioned, perhaps some directed attacks at US troops in Iraq or a 1983 Beirut-style attack against US military installations in Europe.

Almost unbelievably, as of this hour, Iran is treating its shooting of a dozen or two rockets at US airbases in Iraq as the response from an honor/shame perspective.

The US has not admitted any casualties and there are some unconfirmed reports that US troops were evacuated from these bases ahead of time, seemingly as if to allow Iran to declare a victory that is proportionate to the Soleimani hit.

Iran is playing its role as the victor to the hilt. From Tehran Times: 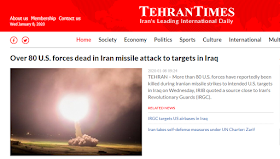 More than 80 U.S. forces have reportedly been killed during Iranian missile strikes to intended U.S. targets in Iraq on Wednesday, IRIB quoted a source close to Iran's Revolutionary Guards (IRGC).

“According to the accurate reports of our sources in the field, at least 80 American troops were killed and some 200 others were wounded, who were immediately transferred out of the airbase by helicopters,” said an informed source at the Islamic Revolution Guards Corps.”

80 deaths would be significant. Of course, it is fictional, but it is a number that is high enough for Iran to declare that they have avenged Soleimani.


“Despite the fact that Americans had been on high alert, their air defense was unable to respond.”

“As many as 104 critical U.S.-held points in the region have been targeted, which would be attacked upon the U.S.’s first mistake,” the source added.

Notice the symbolism of the number 104 - exactly twice the number of sites Trump said he had targeted, also for symbolic reasons (the 52 US hostages in Iran in 1979.)

Chief of Staff of Iran’s Armed Forces Major General Mohammad Bagheri warned that the US will face a harsher response if it conducts any further mischief after the Islamic Revolutionary Guards Corps fired tens of ballistic missiles at American bases in Iraq.

Following IRGC’s attacks to US bases in retaliation to the assassination of top Iranian commander, Lieutenant General Qasem Soleimani, Major General Bagheri said last night’s operations were only a part of Iran’s capabilities in responding the US regime’s mischief.

He stressed that any further misconduct by Washington will bring on a harsher and more severe response.

Here Iran is saying that it believes that its strikes did the job, and they won't perform any more as long as the US doesn't respond to the attack the airbases.

It is too early to say this for sure - there is still the possibility that Iran will pressure Hezbollah or Islamic Jihad to shoot some symbolic rockets at Israel because Iran has spent some propaganda capital blaming Israel as well for Soleimani's death, and they don't want to appear as if they are backing down from that assessment.

Still, at this time, it looks like Trump let Iran know that they can no longer assume that they can act with impunity in the Middle East, and Iran blinked - hard.

The honor/shame culture is what runs the Middle East. To Muslims in the region, appearances are more important than facts. It appears that at least some people in this much-derided administration understood that and the response was calibrated to allow Iran to maintain its honor.

All the while, in the reality based world, the US has won this skirmish hands-down. Iran's major architect of terror is gone and Iran is backing down. The US has shown the Iranian leaders that direct conflict would be a very, very foolhardy move.

Again keeping in mind that it is too early to say for sure, but so far it looks like the "experts" and fearmongers have been wrong, and the White House has achieved an unqualified victory that not only hurt Iran because of their loss of Soleimani, but also has forced them to re-think all of their offensive moves in the Middle East for the foreseeable future.

We have lots of ideas, but we need more resources to be even more effective. Please donate today to help get the message out and to help defend Israel.
Elder of Ziyon at Wednesday, January 08, 2020
‹
›
Home
View web version