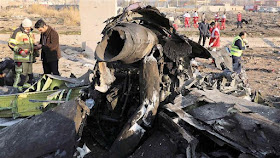 Iran's official PressTV scoured the depths of US conspiracy theory sites to find a way to possibly blame Israel for Iran's shooting down the Ukraine Airlines Flight 752.

A former CIA counter-terrorism specialist and military intelligence officer has raised the possibility of a cyber attack, carried out by the United States and possibly Israel, playing a part in the accidental shoot down of Ukraine International Airlines flight PS752 early this month.

“What seems to have been a case of bad judgments and human error does, however, include some elements that have yet to be explained,” Philip Giraldi argued in a recent article published by the American Herald Tribune.

“The Iranian missile operator reportedly experienced considerable ‘jamming’ and the planes transponder switched off and stopped transmitting several minutes before the missiles were launched. There were also problems with the communication network of the air defense command, which may have been related,” the former CIA specialist said.

It should come as no surprise that Girardi is an antisemite and Holocaust denier who also blames Israel for 9/11.

And the transponder stopped working when the first missile hit the plane, so even his theory is complete garbage.