Egypt, Turkey trade insults over each others' lack of press freedom 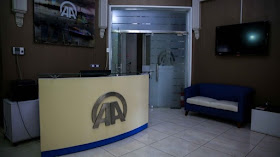 Egypt and Turkey are having a spat over journalists and media freedom. They both sound like children.


In a response to media reports on Egyptian police raid on the Turkish news agency Anadolu, an Egyptian high-ranking state official said Egypt is free to take any means to preserve its national security.

The raid was conducted on Wednesday and resulted in the arrest of four agency employees, according to the agency’s website.

The Egyptian official told Daily News Egypt on Wednesday that the Turkish news agency does not follow international standards of journalism, as it is adopting a hostile stance against the Egyptian people and leadership.

“Egypt does not interfere in other countries internal affairs, therefore it will not allow any entity or country to defame its reputation or release false and inaccurate news. Egypt considers this as an infringement of sovereign rights, which is a red line for us,” the official added.

Meanwhile, the Turkish Foreign Ministry on Wednesday summoned Egypt’s Ankara charge d’affaires over the police raid, according to authorities.

The ministry conveyed Turkey’s reaction on the raid and detention, diplomatic sources said on anonymity.

Turkey strongly condemned the raid, urging the immediate release of the agency’s employees.


The drama continued. From Egypt Independent:

The Egyptian Foreign Ministry responded early on Thursday to Turkey’s statement about the arrest of four journalists working for the official Turkish Anadolu News Agency in Egypt, one of whom was a Turkish national, alleging that Anadolu is an “illegal” company founded by the Muslim Brotherhood, which is outlawed in Egypt and has been designated a terrorist group since 2013.

Ahmed Hafez, a spokesperson for the Egyptian Foreign Ministry, stressed in the statement “Egypt’s rejection, in whole and in detail, of what was stated by the Foreign Turkish Ministry and other Turkish statements,” calling the arrest of the four journalists this week “legal measures” taken by the Egyptian authorities against one of the electronic “illegal” Turkish media outlets in Egypt.

With backing from Turkey, Hafez claimed, the Anadolu spreads “false and fabricated information” related to political, economic, security and legal conditions in Egypt, in what he alleged is an attempt to “distort the country’s image” domestically and abroad.

The statement described the current regime in Turkey under current president Recep Tayyip Erdogan as “one of the worst” on the international indicators of press freedom, freedom of expression and opinion, as well as other fundamental rights.

He pointed out that Turkey occupied an advanced position in the rates of imprisonment of journalists, ranking 157 out of 180 countries on the Freedom of the Press Index for 2019. He added that licenses of nearly 682 journalists in Turkey from November 2018 to March 2019 were revoked.

Hafez also claimed that Turkey supported and financed extremist groups and terrorist militias in a number of countries in the region in an attempt to achieve personal aspirations and “evoke past glories.”

The human rights records of both countries are abysmal, of course. The fact that they are each accusing the other of being worse on that score shows that they at least pretend to care.


We have lots of ideas, but we need more resources to be even more effective. Please donate today to help get the message out and to help defend Israel.
Elder of Ziyon at Friday, January 17, 2020
‹
›
Home
View web version