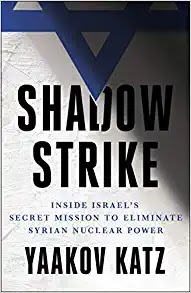 Yaakov Katz, editor in chief of the Jerusalem Post, has put together some great research to describe what went on behind the scenes before, during and after Israel's bombing of the secret Syrian nuclear reactor in 2007.

The actual bombing was not tremendously dramatic. It was a fairly straightforward operation, much easier logistically than the bombing of the Osirak reactor in Iraq in 1981. The real drama came beforehand.

The Mossad hacked into the computer of Ibrahim Othman, the director of Syria's Atomic Energy Commission, when he visited Vienna in early March, at the request of Israel's Military Intelligence, because they had a suspicion that something bad was going on but not nearly enough evidence. The computer gave them everything they needed, including photos of Othman with a North Korean nuclear expert posing in front of a Syrian reactor, under construction, virtually identical to the one the expert was in charge of in Yongbyon.

Throughout the book, we are witness to Israel's decision making - how much intelligence to share with the US? Will the US bomb the facility itself, or try to pressure Syria diplomatically? When it became clear that the US will not act, what repercussions might there be for Israel if it bombed it alone? How can they keep the planning for the operation, which ended up being known by some 2000 people in Israel, a secret? And, most importantly, would the bombing be the first salvo in a major war with Syria, a country with tens of thousands of missiles capable of aiming chemical weapons at all of Israel? How can such an outcome be avoided?

Katz gives lots of background and context, going over the Osirak bombing and some of Mossad's clandestine operations in Syria over the years, from Eli Cohen to the assassination of Imad Mugniyeh shortly after the attack done with the US. (Interestingly, Katz said that the bomb was made by the US to fit in the spare tire compartment of Mugniyeh's Mitsubishi SUV; the book Harpoon that I recently reviewed said the bomb was placed in his headrest.)

Perhaps more knuckle-biting than the raid itself was the preceding covert operation to take soil samples from the reactor itself, with IDF soldiers disguised as Syrian soldiers, with Russian helicopters and AK-47s, to get close to the target without arousing suspicion. The uranium particles discovered provided crucial proof that the facility was indeed a secret nuclear plant.

After the successful attack, Israel still has many diplomatic issues to deal with. When do they talk to their European allies about it and what do they share? How can they deal with Turkey's complaints that they crossed into their airspace (they hugged the Turkish/Syrian border as they flew under the radar.)

If there is any hero in this book, it is Ehud Olmert, who is portrayed as making the tough decisions with no interest in politicizing it, especially at a time when he was under criminal investigation. If there is any villain, it is Ehud Barak, who seems to want to delay the attack until he can topple Olmert to become prime minister so he could take credit. (Even so, during the Jerusalem Post conference in New York last year where Katz was hawking this new book, he had a one-on-one interview with Barak that seemed friendly enough.)

George W. Bush is shown as very sympathetic but unable to risk an operation after the intelligence debacle of the Iraq war. (He promised full support to Olmert after he was informed of the attack in case Syria initiated a war.) John Bolton and Dick Cheney are seen as "getting it" before many other American officials and having great suspicions of North Korea possibly wanting to be a nuclear weapons proliferator. Binyamin Netanyahu is portrayed as a political opportunist, taking partial credit for the operation on American TV when Israel had not accepted responsibility.

Shadow Strike is a fun read, chock full of interesting details that even those who were familiar with the operation beforehand would not have known.

We have lots of ideas, but we need more resources to be even more effective. Please donate today to help get the message out and to help defend Israel.
Elder of Ziyon at Monday, January 27, 2020
‹
›
Home
View web version