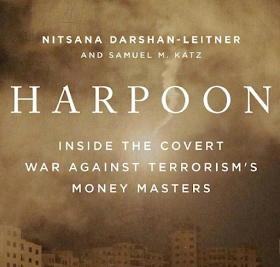 Harpoon: Inside the covert war against terrorism's money masters by Shurat HaDin's Nitsana Dershan-Leitner, published in 2017, is an important chronicle of how Israel, as well as the US, identified the importance of cutting off the money supply to terrorists.

Traditional anti-terrorism methods would follow the operational organization chart of the terror groups, using human and electronic intelligence to find the top people and arrest or kill them. But Israeli intelligence officers in the 1990s realized that when you starve terrorists of their funds, they can't mount any attacks. How to do that is a challenge, though.

The book follows Meir Dagan, legendary head of the Mossad, as he learned the importance of the money trail and became also the head of a task force, codename Harpoon, across Israel's financial, legal and intelligence experts aimed at disrupting and stopping terror financing.

As time went on, several methods emerged of going after the money. Dagan ensured that when Israel went after terrorists during the Second Intifada, they would take all financial records and computers that would allow them to reconstruct the networks of payments and sources.

Another, cruder method was to directly attack sources of money during wartime. Israel bombed banks in Beirut during the 2006 Lebanon War, which meant that Hezbollah couldn't pay their fighters, and - according to the book - Hezbollah asked for a ceasefire when they ran out of money. Similarly, Hamas gave up in the 2014 war after Israel traced a huge cash shipment that was smuggled in through Gaza tunnels to Hamas' main money man, Mohamed el-Ghoul, and blew up his car and all the money.

Also in this category was the spectacular assassination of Mahmoud al-Mabhouh, Hamas commander and financier of Hamas rockets, in Dubai. Such acts ensured that any of the accountants and money-men for terror groups would think twice and spend much more time protecting themselves, meaning less time to do damage.

A very effective method, and one that Derahan-Leitner knows well, is using the legal system to sue terror groups and their financial institutions in friendly countries. Some of these break new legal ground, and now banks are much more responsible for keeping track of who they provide services to.

The book's blurbs talk about how it "reads like a thriller." Not really. There are a couple of interesting episodes, though not directly attributed to Israel or the US, where a major Hezbollah financier was convinced to invest in a sure-thing investment in Doha; after seeing astonishing returns he convinced Hezbollah leaders including Hassan Nasrallah to invest a total of about a billion dollars. The company vanished along with their cash.

The sources of terror financing were Islamic charities throughout the world, Iran, the PLO skimming money from aid given to them by Europe and the US to build a state, and a huge criminal enterprise that Hezbollah and Iran set up in Venezuela and Africa (as well as the US) to make money off of illegal drugs, prostitution, cigarette smuggling and the like, and laundering these through purchases of items like cars.

Many of the episodes mentioned in the book were tactical successes but the major money machine from Iran and Hezbollah criminal enterprises continued to churn out huge amounts of cash for terrorists. Mentioned although not stressed in the book are US sanctions against terror groups and their sponsors, mostly Iran. Israel cannot do this alone - it had to lobby the US over years to understand the importance of money for worldwide terror. The current sanctions against Iran are one of the single most important things possible to choke off terror financing in the Middle East.


We have lots of ideas, but we need more resources to be even more effective. Please donate today to help get the message out and to help defend Israel.
Elder of Ziyon at Sunday, January 19, 2020
‹
›
Home
View web version