Blatant lies in Palestinian report to UNHRC on children's rights

The "State of Palestine" signed on to the Convention on the Rights of the Child on April 1, 2014, with very little intention of actually implementing any of its provisions. Instead, as its initial report to the UN Human Rights Council shows, the main reason for signing the Convention was to slam Israel:

The State of Palestine is under a colonialist, military occupation on the part of Israel and this report will throw some light on the colonialist policies of that occupation and the serious, systematic and widespread violations that infringe the provisions of the Convention. In fact, the Israeli occupation authorities deliberately and systematically target Palestinian children on a wide scale including through extrajudicial killings, arbitrary detention, displacement and forced migration with the aim of terrorizing an entire generation.

Many of their responses are provable lies, and others (about teaching birth control in schools, for example) are almost certainly untrue as well.

87.The Ministry of Education has issued guidelines to combat all forms of violence in school and has implemented programmes to the same end, including a child-friendly-school programme that aims to provide an educational, social, psychological and health-related school environment that is welcoming and friendly to children. The programme also envisages activities to protect children and teachers alike. In addition, modules have been incorporated into school curricula that aim to promote a culture of dialogue, respect for the opinions of others and the acquisition of basic life skills by pupils.

In fact, dozens of schools are named after terrorists and glorify "martyrdom."

89.There are no cases in the State of Palestine in which children are alleged to have participated in hostilities. National laws and legislation provide complete protection for children and forbid their use or exploitation in hostilities. The Palestinian Child Act No. 7 of 2004, as amended, prohibits the use or exploitation of children in any unlawful activities and reaffirms the right of children to life and security.

Every single week children are encouraged to sling stones to Israelis.

Here's a protest of students in Hebron where they attack soldiers.

90.There is a national consensus against the exploitation of children in any circumstances and, in fact, children are not exploited for political purposes in the State of Palestine.


Here's a protest organized specifically by the PA for children against Trump last year. 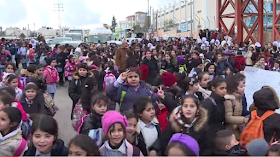 Here is a poem that a child recited on PA TV:


"I am the Palestinian lion cub…The blood of the Martyrs flows in my veins
I am like a lion in the fields [of battle] If the drums of war call, I harvest the souls in the fields
My sword is drawn and won’t return to the sheath…
The armies of treachery fear me and the Dark-Eyed [Virgins] yearn for me
I have not sold my homelands, and have not given up my assault rifle
Today I carry my shrouds, and in my heart my faith strengthens
Because victory and liberation are coming at the hands of the lion cubs”

This is child abuse - and it is encouraged by the Palestinian Authority.

But the UN is not likely to look past the lies in the report.


We have lots of ideas, but we need more resources to be even more effective. Please donate today to help get the message out and to help defend Israel.