What the hell is going on in Jersey City? 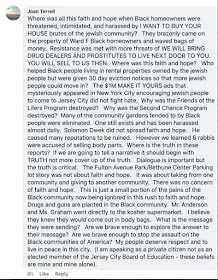 Yesterday and this morning, the headlines were about Joan Terrell-Paige, an elected member of the Jersey City Board of Education, who appeared to condone the murder of two religious Jews in Jersey City:


A member of the Jersey City Board of Education unleashed an anti-Semitic, conspiracy-laden Facebook rant appearing to justify the shooting rampage there that left a cop and three hostages in a Jewish market dead.

“Where was all this faith and hope when Black homeowners were threatened, intimidated, and harassed by I WANT TO BUY YOUR HOUSE brutes of the jewish community?” Joan Terrell Paige began her screed, which was apparently deleted but captured by the Reagan Battalion conservative outlet.

“They brazenly came on the property of Ward F Black homeowners and waved bags of money,” Paige continued.

“If we are going to tell a narrative it should begin with TRUTH not more cover up of the truth,” wrote Paige. “Mr. Anderson and Ms. Graham went directly to the kosher supermarket. I believe they knew they would come out in body bags.

The bizarre screed included insinuations that Jews sell body parts and threaten blacks to sell their houses to them or else they will bring in prostitutes and drug dealers, and somehow eliminated community gardens.

While the (Jewish) mayor of Jersey City condemned the statement, the Hudson County Democratic Black Caucus - while pretending to want dialogue with the Jewish community - ended up agreeing with the content - not the tone - of Terrell-Paige. This wasn't the drunken ramblings of an individual but an official press release: 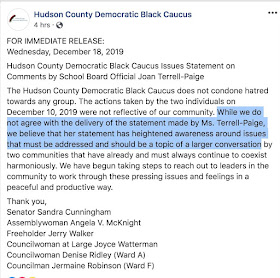 The Hudson County Democratic Black Caucus does not condone hatred towards any group. The actions taken by the two individuals on December 10, 2019 were not reflective of our community. While we do not agree with the delivery of the statement made by Ms. Terrell-Paige, we believe that her statement has heightened awareness around issues that must be addressed and should be a topic of a larger conversation by two communities that have already and must always continue to coexist harmoniously. We have begun taking steps to reach out to leaders in the community to work through these pressing issues and feelings in a peaceful and productive way.

In other words, the antisemite has a lot of valuable things to say about Jews.

Instead of denouncing antisemitism, this caucus is doubling down.

The Democratic Black Caucus statement on the murders themselves - written the day afterwards - didn't even acknowledge that anyone besides the police officer were killed: 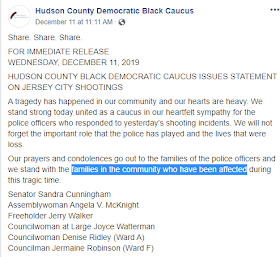 A tragedy has happened in our community and our hearts are heavy. We stand strong today united as a caucus in our heartfelt sympathy for the police officers who responded to yesterday’s shooting incidents. We will not forget the important role that the police has played and the lives that were loss.

Our prayers and condolences go out to the families of the police officers and we stand with the families in the community who have been affected during this tragic time.

No condolences for the families of three of the victims, who they knew damn well were all in the kosher grocery. Clearly, they do not consider Jews to be part of the community - or even to have lives worth mourning or mentioning.

There is a problem with black antisemitism in America. As much as we want to believe that the Jersey City black community is disgusted by the cold blooded executions in their midst, there is plenty of this official antisemitism from the actual leaders of the black community there.

It isn't only people who follow Farrakhan. This goes far deeper and is just as dangerous.

Where are the black leaders who will condemn these sickening press releases by elected officials and the antisemitic rant by a seventh?

Only a few miles from Jersey City, where there is a large Jewish community, the NAACP Passaic Branch Facebook page includes this pure antisemitism posted Wednesday: 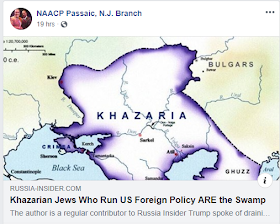 And they posted this Tuesday:


Finally, just because a Black person, group, or Black organization condemns Jews for the horrendous acts they’ve committed and continue to commit against Black people doesn’t make that person or organization Anti-Semitic and an Anti-Semite. As I asserted and proven here, in order to be correctly classified as an Anti-Semite or Anti-Semitic, one must be anti all of those various peoples whose primary language is a Semitic language. You cannot exclude any of those various people whose primary language is a Semitic language. You must include all of them in order to be anti-Semitic -End of discussion. P.S. For The Record Jeffrey Dye Or The Passaic NAACP Don't Speak A Semitic Language So Please Stop Putting That ( "Propaganda" ) False Claim On Us.

And if it is not discussed, it cannot be fought.

I found one great black speaker on the topic of antisemitism, apparently speaking at a synagogue. (UPDATE: This is Larry Elder.)


Unfortunately, he seems to be an exception, based on what I can find.

And as long as black leaders don't speak out against antisemitism in all its forms, we will be having more Jersey Citys.

We have lots of ideas, but we need more resources to be even more effective. Please donate today to help get the message out and to help defend Israel.
Elder of Ziyon at Wednesday, December 18, 2019
‹
›
Home
View web version