Rashida Tlaib is heartbroken over murdered Jews. Oh, they were killed by blacks? Never mind. 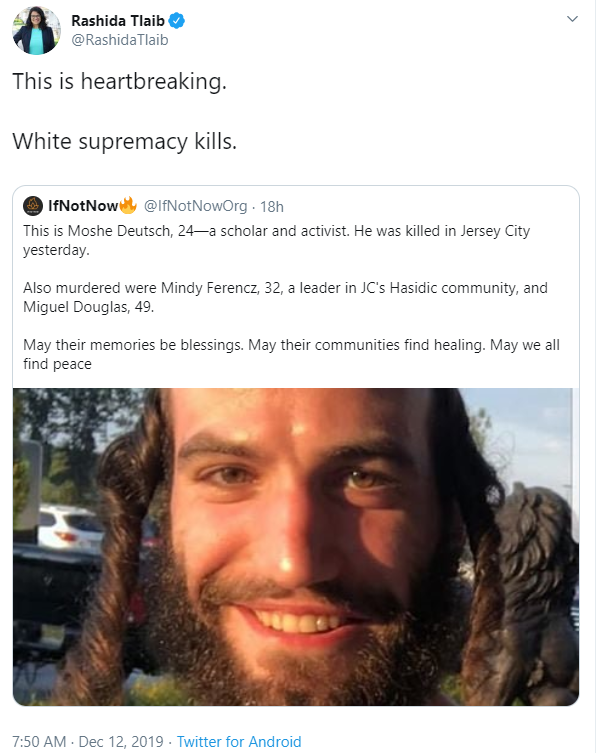 Within seconds, people started responding that she should apologize because the Jersey City murderers were black, not white supremacists.

But she didn't apologize.

She didn't correct herself.

She didn't send another tweet explaining how she is heartbroken over the deaths that weren't done by white nationalists.

The reason is as disgusting as it is obvious and as obvious as it is politically incorrect: Rashida Tlaib identifies more with the Black Hebrew murderers than with the Jewish victims of antisemitic violence.

The anti-Israel political forces in America align themselves with angry black people in the false pretense that they are fighting the same battles. They succeeded in convincing Black Lives Matter that Jews/Israelis were responsible for American police violence.

You just know that as soon as Tlaib realized her mistake, she started thinking - what were Jews doing in a black neighborhood? How have they upset the locals? What did they do to deserve to be murdered?

Because the only people who are lower in the intersectionality totem pole than Jews are Trump supporters and neo-Nazis. When someone with a lower score is involved in a conflict with someone with a higher score, the presumption of innocence goes to the higher score. By finding out that the victims has a lower intersectionality score (-6) than the murderers (8 and 14) suddenly Tlaib was no longer heartbroken...except, perhaps, for the poor black people who felt so marginalized by the rich powerful Jews moving into their neighborhood that they felt they had to defend their community.

This is the sick mentality of the "progressive" Left.


We have lots of ideas, but we need more resources to be even more effective. Please donate today to help get the message out and to help defend Israel.
Elder of Ziyon at Thursday, December 12, 2019
‹
›
Home
View web version