I am seeing people who usually blame all antisemitism on white nationalists saying they are horrified about the machete attack on religious Jews in Money, NY Saturday night.

But look what they don't say: 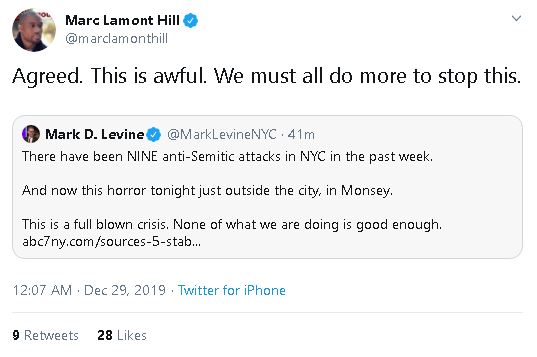 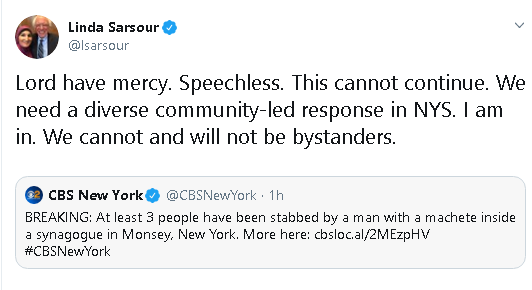 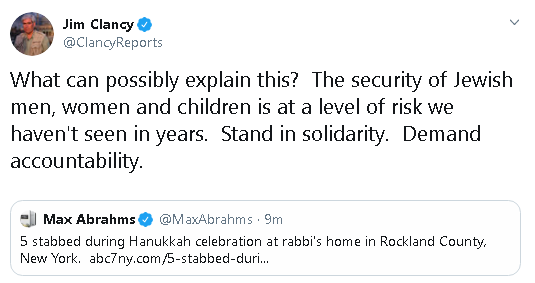 None of them say that the attackers, here and in most of the other incidents over the past week, were black.

Mentioning that fact is Kryptonite. It is what Must Not Be Said. Black antisemitism must be subsumed under All Antisemitism which, as these people will insist, is driven by white supremacism.

They all have different methodologies and different philosophies. They cannot be fought as if they are the same thing. Lumping them all together is another way of downplaying them and ensuring that nothing is done.

Some are warning us to not mention the unmentionable: 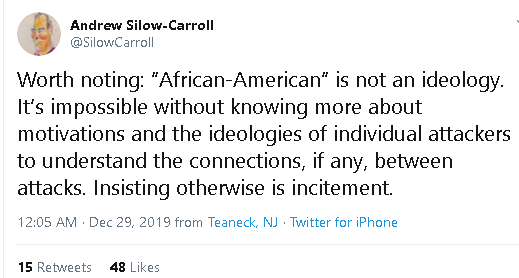 It is true that there could be different motivations for black attacks on Jews - as I mentioned, Farrakhan hate of Jews is different from that of inner city blacks. Those are pretty much the only major flavors of black antisemitism I am aware of.  But ignoring the commonality is a sure way to ensure that the problem is not solved. It would be foolish to assume that there is no element of copycat attacks as black people are hitting Jewish people on the head in the streets of Brooklyn and  running away. Certainly the black attackers don't have the same motivations as the Arab, white nationalist or Leftist antisemites.

If someone wants to do a study on black antisemitism, by all means, we can use more data. But don't ignore the problem because we don't fully understand it. There is enough data to start fighting it.

It is most definitely not incitement to mention that blacks are attacking Jews. It is pointing out the obvious, and ignoring it is a sure way to ensure that it continues. Incitement is encouraging violence, and absolutely no one is saying or implying "attack blacks because some of them hate Jews."

But there is another problem with sweeping the fact of black antisemitism under the rug. No matter what the motivation is, a large part of the solution is for respected leaders of the black community to speak out about it - not black Republican outliers, but the mainstream political, activist and religious black leaders. If no one acknowledges that there is a definite problem in the black community in the New York area that prompts the types of attacks we have seen over the past couple of years (often on video) there is no pressure for their leaders to speak out about it and stigmatize it.

The fear of being called a racist is stopping political allies from demanding a response from the community leaders. Meaning that actually fighting antisemitism is deemed to be less of a priority than the chance of being (falsely) labeled a racist by pointing out what everyone knows but no one on the left is willing to say out loud.

Most blacks are not antisemitic, although the percentage is roughly double that of whites (in 2016, 23% compared to 10%.)  No one is saying that all blacks should be blamed. But the fear of being labeled a racist is the major reason there has not been any effective outreach to the black community to help solve this problem.

Conservatives cannot do a damn thing to stop this scourge.

We need black leaders to step up. And we need their political allies on the Left to pressure them to speak up. Their refusal to admit that there is such a thing as black antisemitism is the major reason that it is getting worse. It is cowardice, pure and simple. And it reflects an unfortunate belief that it is better for Jews to be stabbed than for making black leaders uncomfortable that their communities are raising many youths to hate Jews.

Demanding that black leaders take responsibility for their own communities is a small price to pay to stop violent attacks. Anyone who thinks otherwise is enabling antisemitism. (And assuming that black leadership will lash out at anyone for bringing up the topic to save lives is itself condescending and racist.)

We have lots of ideas, but we need more resources to be even more effective. Please donate today to help get the message out and to help defend Israel.
Elder of Ziyon at Sunday, December 29, 2019
‹
›
Home
View web version