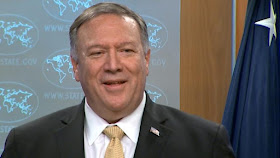 Here is what Secretary of State Pompeo said in his remarks Monday about Israel:

U.S. public statements on settlement activities in the West Bank have been inconsistent over decades.  In 1978, the Carter administration categorically concluded that Israel’s establishment of civilian settlements was inconsistent with international law.  However, in 1981, President Reagan disagreed with that conclusion and stated that he didn’t believe that the settlements were inherently illegal.

Subsequent administrations recognized that unrestrained settlement activity could be an obstacle to peace, but they wisely and prudently recognized that dwelling on legal positions didn’t advance peace.  However, in December 2016, at the very end of the previous administration, Secretary Kerry changed decades of this careful, bipartisan approach by publicly reaffirming the supposed illegality of settlements.

After carefully studying all sides of the legal debate, this administration agrees with President Reagan.  The establishment of Israeli civilian settlements in the West Bank is not per se inconsistent with international law.

The Israeli legal system affords an opportunity to challenge settlement activity and assess humanitarian considerations connected to it.  Israeli courts have confirmed the legality of certain settlement activities and has concluded that others cannot be legally sustained.

Second, we are not addressing or prejudging the ultimate status of the West Bank.  This is for the Israelis and the Palestinians to negotiate.  International law does not compel a particular outcome, nor create any legal obstacle to a negotiated resolution.

Third, the conclusion that we will no longer recognize Israeli settlements as per se inconsistent with international law is based on the unique facts, history, and circumstances presented by the establishment of civilian settlements in the West Bank.  Our decision today does not prejudice or decide legal conclusions regarding situations in any other parts of the world.

And finally – finally – calling the establishment of civilian settlements inconsistent with international law hasn’t worked.  It hasn’t advanced the cause of peace.

The hard truth is there will never be a judicial resolution to the conflict, and arguments about who is right and wrong as a matter of international law will not bring peace.  This is a complex political problem that can only be solved by negotiations between the Israelis and the Palestinians.

The United States remains deeply committed to helping facilitate peace, and I will do everything I can to help this cause.  The United States encourages the Israelis and the Palestinians to resolve the status of Israeli settlements in the West Bank in any final status negotiations.

And further, we encourage both sides to find a solution that promotes, protects the security and welfare of Palestinians and Israelis alike.

And then in answering a question:

... We’ve had a long time with the policy, the legal interpretation announced today being the other way and it didn’t work.  That – that’s a fact in evidence.  We believe that what we’ve done today is we have recognized the reality on the ground.  We’ve now declared that settlements are not per se illegal under international law, and we have provided the very space that your question suggests, the very space for Israel and the Palestinians to come together to find a political solution to this very, very vexing problem.

We think, in fact, we’ve increased the likelihood that the vision for peace that this administration has, we think we’ve created space for that to be successful.  I’m hopeful that we’ll be able to move forward on that before too terribly long.


Pompeo is right. The supposed "illegality" of settlements allows the Palestinians to not work towards peace, They have been sitting back for more than a decade hoping for some international body to hand them the West Bank. They've refused peace offers. This strategy is a failure.

The anti-Israel crowd is claiming that this will allow Israel to take over the West Bank with settlements. No, that won't happen. Israel doesn't want to rule Palestinian Arabs. If the legal threat is removed, it gives both parties a chance to actually negotiate and make some choices - if Palestinians really want a state.

I'm not convinced they do, but this gives them a chance to show it, instead of hiding behind the threat of going to the International Court of Justice or getting the next zillion UN resolutions in their favor.

I'm sure Europe is not on board with this, and in fact the Palestinians have been able to rely on the EU to be a more reliable ally in this issue than the Arab states themselves. But that position is eroding. Just as the Arabs have gotten fed up with the Palestinian issue, so Europe will go.  It cannot happen soon enough.

Despite the self-anointed "experts" who have been acting like the Oslo process is still alive, this decision by the US can and should push Palestinian leaders to realize that time is not on their side and to act accordingly. Up until now they have been smug and acting like they have the upper hand. This strategy of waiting for others to push Israel to do what Palestinians want has sustained the Palestinian leadership.

The peace process has been stuck in the same pattern for a long time. The idea that Israel can be pressured to do things that are against its best interests has been shown to be false.

One other positive from this decision is that it helps slow down the demonization of Jews who want to live in their ancestral lands.

I recently pointed out that the UN puts "settlers" into a different category as victims of conflict than "civilians." There is no precedent for this in international law. But it helps normalize the idea that somehow Jews who choose to live in their ancetral lands are less deserving of human rights, a little less than human themselves. This decision, by giving the "settlers" the same human rights as everyone else, helps erase what was a frankly disgusting excuse for Palestinian terror.

Now the world can start to look at Judea and Samaria as an issue of competing rights, not of Jews taking away rights from Palestinians. That narrative was never true and it just made Israel less likely to trust any international body.

When Israel is treated fairly by the world, and when Palestinians finally learn to co-exist with the Jewish state, then peace would be fairly easy. Unfortunately, neither of those are likely to happen for a very long time. Even so, this US move is a welcome step in the right direction.

We have lots of ideas, but we need more resources to be even more effective. Please donate today to help get the message out and to help defend Israel.
Elder of Ziyon at Monday, November 18, 2019
‹
›
Home
View web version