Supporting Jews is antisemitic and supporting the enemies of Jews is fighting antisemitism, in the newspeak of the anti-Zionist crowd.

It used to be that the Jew-haters would claim that they aren't antisemitic because "Arabs are Semites," an early form of antisemitism inversion.

But the new versions are more sophisticated.

One strain, popular at Electronic Intifada, claims that antisemitism is a form of racism, Zionism is a form of racism, so therefore anti-Zionists are fighters against antisemitism. They will also update an older argument of finding times that Zionists have worked together with antisemites (going back to the Haavara agreement with Nazi Germany) in order to save Jewish lives as evidence of Zionist "collaboration" with antisemites.

Another is to find a neo-Nazi who expresses support for Zionism as a form of white nationalism as proof that Zionism supports neo-Nazism. This violates a fundamental rule of logic but the modern anti-Zionist antisemites don't quite care.

Here's another, courtesy of IfNotNow:

The logic here is not expressed, perhaps because there is none. But the idea seems to be that all forms of "struggle" are the same - as long as they are the right (or Left) forms of struggle.

Obviously, the Jewish struggle for self-determination, or the Israeli struggle to be treated with the same yardstick as every other nation, are not "struggles" that can be compared to the progressive-approved "struggles."

Arabs have been the most ardent antisemites since the Nazis. This site has listed hundreds of examples of Arab and Palestinian antisemitism over the years. Just yesterday I documented explicit Jew-hatred by Palestinian leaders at the UN itself.  This 2010 Pew survey of Arab attitudes towards Jews tells the story as explicitly as possible: 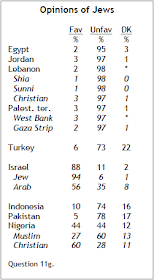 97% of Palestinians are antisemitic.

When IfNotNow clams to support the Palestinian "struggle for freedom" this is what they are supporting - the actualization of Palestinian antisemitism.

It is willful blindness to overlook the antisemitism that has always animated Palestinian nationalism since the Mufti in the 1920s accused Jews of trying to destroy Al Aqsa. It is only slightly less self delusional to pretend that Arab antisemitism is a response to Zionism when it pre-dates Zionism.

One cannot separate Palestinian Jew-hatred and their "struggle for freedom." But modern antisemites who pretend to be merely anti-Zionist not only separate them, they invert Palestinian antisemitism into a struggle against antisemitism.


We have lots of ideas, but we need more resources to be even more effective. Please donate today to help get the message out and to help defend Israel.
Elder of Ziyon at Thursday, November 21, 2019
‹
›
Home
View web version