PLO diplomat admits, in English, that Palestinians never wanted to live side by side with Israel (video) 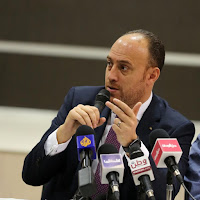 Here is Husam Zomlot, the PLO representative in the UK (who calls himself the "Ambassador of Palestine at the UK,") discussing how the Palestinians never wanted a two state solution next to a Jewish state.

Two states, he says, was merely a concession to the international community, but it is not a Palestinian desire. The entire land is solely theirs, and Jews have no rights there.

This is not usually said in English. Usually in English the Palestinians claim they want to live in peace with Israel. But now they are officially admitting that they never even wanted that; their real desire (as polls have shown) is to have a single Arab state from the Jordan to the Mediterranean, and the two state idea was merely a stage towards that end.

(This was at the Pearson Global Forum in Berlin earlier this month.)


We have lots of ideas, but we need more resources to be even more effective. Please donate today to help get the message out and to help defend Israel.
Elder of Ziyon at Friday, October 25, 2019
‹
›
Home
View web version