Palestinians arrest, torture convert to Judaism. @HRW silent, as it ALWAYS is for Muslim and Arab antisemtiism. 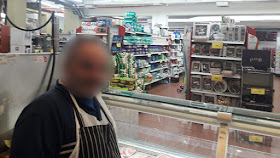 A Palestinian from the West Bank who converted to Judaism in Israel was inexplicably arrested by Palestinian Authority forces security forces over two weeks ago and has been held in custody ever since. He claims to have been tortured during that time on multiple occasions, which left his limbs badly burned.

The 50-year-old is Hebron resident who worked at a supermarket in the Jerusalem area. He converted on the eve of Rosh Hashanah three weeks ago at a strict Haredi court in the city of Bnei Brak by Rabbi Nissim Karelitz, who passed away on Monday.

Prior to his conversion he studied at Machon Meir Yeshiva in Jerusalem, an institution strongly associated with nationalist politics and settler movement. He was in the process of having his conversion recognized by the Chief Rabbinate of Israel before he was arrested, which would have allowed him to apply for Israeli passport.

On the eve of Yom Kippur, the man traveled to an area of the West Bank under Palestinian security control, just beyond the section of the territory under Israeli security control. There, he was supposed to meet with one of his nine children, who along with their mother are all Muslim.

During the family reunion, a white Skoda vehicle carrying four men approached the 50-year-old. The men got out of the car, dragged the Palestinian into the vehicle and drove away. Later, the man was dropped off at a police station in Hebron by the four.

Haim Perg, the leader of the Jewish community in Hebron, is helping the Palestinian with his legal troubles and according to him, the 50-year-old is the grandson of a Palestinian man who helped save Jews during the 1929 Hebron massacre.

"As far as I'm concerned, he's like my son, and I will shake up the world for somebody to come and save him," Perg said. "The man's grandfather rescued 26 Jews during the events in Hebron. Now that he is in danger, we have a commitment to help him."

Perg added that he spoke by phone with the Palestinian who told him he was being badly beaten and had even had his hands and feet burned during the torture he’s had to endure.

This story has been out in English for 24 hours, and tweeted to Human Rights Watch. Yet even though they tweet lots about Israel, this story somehow is not important enough to even tweet.

The reason, of course, is that to HRW, Arab and Muslim antisemitism is a topic that must never be mentioned or hinted at.

Look at this article from a HRW researcher about antisemitism in Europe in 2015 after a spate of mostly Muslim attacks on Jews:

In January, four Jewish men were killed in a kosher supermarket in Paris, two days after the brutal attack on the satirical magazine Charlie Hebdo that left 12 people dead. Last week, a man attacked a synagogue in Copenhagen, killing a Jewish man as he guarded the building during a Bat Mitzvah celebration.... Last May, a man shot four people dead in a Jewish museum in Brussels. In 2012, a man and three children were shot dead at a Jewish school in Toulouse.

Not once is the fact that these were Muslim attacks mentioned. And if you would come up with that conclusion on your own, HRW doesn't want you to take any guesses that perhaps Islamists have a problem with Judaism:


[T]he factors which drive some to commit violence are complex too; some attackers may have been exploited and coerced, while others may have acted more out of frustration than deep-seated hatred.

HRW is bending over backwards to excuse Islamist antisemitism!

But when the synagogue in Halle was attacked on Yom Kippur, then HRW mentioned "right wing extremism." That can be named, Islamic and left wing extremism cannot be.

Interestingly enough, the German report on extremism linked to by HRW has separate sections on right-wing, left-wing and Islamic violence. But HRW only mentions one of them and does everything it can to erase the other two. 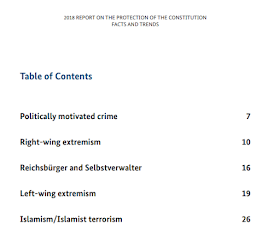 We have lots of ideas, but we need more resources to be even more effective. Please donate today to help get the message out and to help defend Israel.
Elder of Ziyon at Wednesday, October 23, 2019
‹
›
Home
View web version