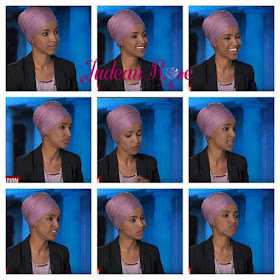 When Ilhan Omar told Face the Nation’s Margaret Brennan that Benjamin Netanyahu’s existence is contradictory to peace, it was a death threat, a call to murder the Israeli prime minister, an invitation to murder a Jew.
Let’s take a look at the transcript:
MARGARET BRENNAN: You were specifically banned by the prime minister of Israel, Benjamin Netanyahu from visiting that country. He faces a very tough election in the next few days. If he doesn’t win, are you going to try to go back and do you stand by your call for a boycott of Israel?
REP. OMAR: I certainly hope that the people of Israel make a different decision. And my hope is that they recognize that his existence, his policies, his rhetoric really is contradictory to the peace that we are all hoping that that region receives and receives soon.
Omar did not say that Netanyahu’s reelection is contradictory to peace. She said his very existence prevents peace. That as long as Netanyahu is alive, peace is impossible.
Ergo, someone needs to kill him: Netanyahu must die.
The way Omar inserts this into the narrative may be sly and understated. But it is there, a question asked and answered: How can we bring peace? By eliminating Netanyahu.
Referring to Netanyahu's existence as something that goes against peace serves as the perfect bait to court any extremists who might be listening. Omar is saying, “Netanyahu needs to die. Who will kill him?”
It is a call to action, a call to arms.
It is not the first time we have seen a brazen call to kill one Jew or many, words nestled in a cunning manner like a coiled snake that makes itself small in the grass, words interwoven with enough other words to offer cover. The words are our warning. Typed words, spoken words, words recorded for posterity. Code words. Phrases. Manifestos, online or in books. Words to be interpreted, explicated.

Words then the weapons, and finally the murders, whether one or many, at Auschwitz, AMIA, or Tree of Life.
Words like “Jews don’t require peace” which really mean: “Jews need to die.”

It is obvious, out there in the open, yet hidden in plain sight like the snake in the grass you don’t see when you close your eyes because you’d rather not see it: rather not be a party to what could happen, what will happen, what always happens: Amalek rising up for the kill, poised to strike.
And after the fact, you can always say it wasn’t clear to you at all. You never suspected, never saw the snake in the grass, the threat that lurked behind the words, never read the meaning nor saw the signs. Never knew that when Omar said “Netanyahu’s existence is contradictory to peace,” she was calling for his death, because the opposite of his existence is his death.
Why say these things now? Because the brouhaha over the application of Israel's No Entry Law came and went. We had the outraged talking heads spouting off for a week or so. "Undemocratic" they called Israel. "Apartheid state," they said. And then the outrage ran dry. Because news cycles are nothing if not short.
This is the reason Omar needed this Face the Nation interview, now at this time. It was a chance to get airtime and talk about BDS: the acronym that gets everyone fuming, the perfect fuel to rekindle that age-old lust for the destruction of Israel.

Also, BDS opposes a two state solution and openly advocates, as part of its founding aims and principles, the destruction of the Jewish state. So, lol: pic.twitter.com/EIfh9cmdKm
— Seth Mandel (@SethAMandel) September 15, 2019

In hindsight, we know the truth, that barring Ilhan Omar from entering the Jewish State was an act of supreme wisdom. Who cares about the word fallout, the slurs against our nation? Here is a person who wished harm to our prime minister in a televised interview.
At the very least we must stipulate that there are at least two ways to interpret Omar's words: that the prime minister should not be in office, or that he should be gone from this earth. Is it so far fetched to think she means the latter? Because all the really bad things in Jewish history began with words just like these. Words you look at, after the fact, and think, "How could I ever have thought 'Final Solution' didn't really mean 'final'?"
The world is predictable. It will ignore Omar’s sly, understated words and their meaning. And the Jews will continue to be reviled, even by their own, as they play limbo, slipping beneath the word arrows as they are slung, the calls to murder the head Jew, the prime minister of the Jewish State, inserted with care into the narrative during a public interview that everyone hears, even as fingers plug ears, and cognition fails.
It's an ancient story, an ancient call, a call we don't often hear in time.

We need to be paying attention.
We have lots of ideas, but we need more resources to be even more effective. Please donate today to help get the message out and to help defend Israel.
Varda Meyers Epstein (Judean Rose) at Thursday, September 19, 2019
‹
›
Home
View web version